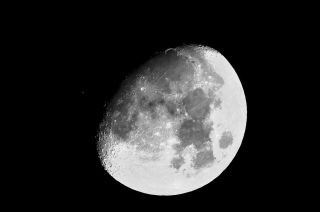 Astrophotographer Laura Austin caught the moon's occultation of the star Aldebaran, on Jan. 19, 2016, from her location in Sarnia, Ontario, Canada,
(Image: © Laura Austin)

In space, an occultation happens when one object passes in front of another from an observer's perspective. A simple example is a solar eclipse. From a certain area on Earth, the moon passes in front of the sun and either partially or totally blocks the light. So we can say that the sun is "eclipsed" or "occulted."

A lunar eclipse is another example of an occultation, but the description is a little more complicated. When this happens, anybody on the dark side of the Earth can watch the moon pass into the Earth's shadow, so that the Earth is directly in between the Earth and the sun. This eclipse or occultation turns the moon red-brown because it catches the reflected light on the edge of Earth's atmosphere, where the wavelengths are longest.

It should be emphasized that occultations don't only take place on Earth — they can take place anywhere in the universe. For example, the Apollo 12 astronauts flew through Earth's shadow and saw a solar eclipse on their way home from the moon in 1969.

The moon travels on a path in our sky that is called the ecliptic. It represents the plane of our solar system and that approximate area is where the sun, moon and planets travel in our sky. This means that the moon can sometimes pass in front of distant planets and stars.

The International Occultation Timing Association provides detailed information, such as exact locations and timing of expected occultations, for anyone interested in looking at the moon passing in front of stars. These events can be observed with even a small telescope. Of the most interest scientifically are "grazing occultations." These happen when the moon's visible edge, or limb, passes by a planet or star.

As the moon moves along its path during a grazing occultation, the star or the planet can wink in and out of sight. If there are multiple people watching the grazing at the same time, it can reveal much about the objects involved in the occultation or about general astronomical principles, IOTA said.

For example, a star may "disappear" and reappear in stages during the graze, which would indicate that it must be a previously unknown double star whose members are so close together that they can't be seen individually in a telescope. Observers also learn more about the moon's topography, which can help with the exact timing of solar eclipses (when the moon passes in front of the sun.)

More generally, IOTA added, "Such observations are useful for refining knowledge of the positions and motions of stars, and can be used to improve parameters such as the tilt of the Earth's equator relative to the ecliptic (the plane of Earth's orbit around the Sun) and even the rotation of the Milky Way galaxy."

Very rarely, the moon can occult two planets at the same time. The last occasion was in 1998, when it passed in front of Venus and Jupiter. The next "double conjunction" will take place with Mercury and Mars in 2056.

Asteroids are small, rocky bodies in the solar system. There are many locations for them, including some that pass by Earth and others that orbit in a belt between Mars and Jupiter. Occasionally, an asteroid may pass in front of a star. Since an asteroid is very small, it's important to be very precise in where you travel to watch the occultation, IOTA said. It's also best to record the occultation with a video or CCD camera since the dip in light can be subtle.

If you can't travel to watch an asteroid occultation, there may still be some value to watching one happen away from the "shadow line," IOTA added. That's because sometimes watching an occultation can find a hidden moon. "Such secondary occultations should be expected to occur within plus or minus one minute of the actual asteroid occultation and be of very short duration, perhaps a fraction of a second, and may be quite distant from the predicted asteroid shadow line," the organization said.

These are some of the most famous occultations because they revealed basic science about the planets in our solar system. Perhaps the best-known example is when scientists observed Uranus moving in front of a star in 1977 from NASA's Kuiper Airborne Observatory (in other words, in midair). The scientists found rings, NASA wrote, because "they noticed the starlight winking on and off as the star first appeared to move toward the planet, and then again as the star moved away from the planet."

Pluto's tenuous atmosphere, although mapped in detail by New Horizons after a flyby in 2015, was actually known about decades beforehand. In 1988, a star occultation revealed Pluto has a nitrogen atmosphere. Scientists could even see example of a "fog" layer in Pluto's atmosphere because the star suddenly changed in brightness, according to the French space agency CNRS.

Planets can sometimes pass in front of other planets (which last happened when Venus transited Jupiter in 1818; the same occultation will happen again in 2065.) Planets can also occult extremely bright stars. The last occurrence was in 1959, when Venus passed in front of the star Regulus. Another occurrence between these celestial bodies is slated to happen in 2044.

As for the sun, Mercury passes in front of it several times in a century; the last time was in 2016, and the next time will be in 2019. In recent history, Venus passed in front of the sun in 2004 and 2012; the next transit will be in 2117. Scientists used the Venus transit to improve their exoplanet studies. They measured its diameter and probed its atmosphere using the transit technique, then compared it to data we already have to see if the transit technique could help us make predictions about exoplanets.

Occultations can also be artificially produced to take a look at certain phenomenon in detail. Perhaps the best-known use is blocking the light of the sun or a star to see what is nearby. Telescopes on Earth and in space regularly block the sun's light to observe the corona, the faint outer atmosphere of the sun that is otherwise blinded by the main part of the sun's disk.

For the SOHO (Solar and Heliospheric Observatory) spacecraft, blocking the sun's light created an unexpected side benefit; the spacecraft turned out to be an awesome "sun-grazer" comet catcher. SOHO has found more than 3,000 comets using this method, including the infamous Comet ISON that was first predicted to light up Earth's skies in late 2013. The comet broke up after passing by the sun, but not before brightening briefly and causing some confusion about if it had died or not.

A device called a "starshade" could help scientists search for life on other worlds by using occultation. Some suggest using a starshade in conjunction with NASA's planned Wide Field Infrared Survey Telescope (WFIRST), which would launch in the mid-2020s. The basic idea is to block starlight and allow scientists to see a planet directly, rather than waiting until it passes in front of the star (or measuring the star's wobble for gravitational influences from planets.) Starshades are being tested on the ground, but none have flown in space before.