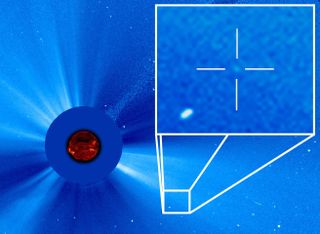 The dot in the cross-hairs is the 3,000th comet discovered by the NASA/European Space Agency Solar and Heliospheric Observatory (SOHO), as seen on Sept. 14, 2015. The comet was spotted in SOHO data by Worachate Boonplod of Thailand.
(Image: © ESA/NASA/SOHO)

A spacecraft that launched in 1995 to study the sun has discovered its 3,000th comet, further bolstering its credentials as history's greatest comet hunter.

The Solar and Heliospheric Observatory (SOHO), a joint effort of NASA and the European Space Agency (ESA), spotted comet number 3,000 on Sunday (Sept. 13). The landmark discovery was pulled out of SOHO's database by Worachate Boonplod of Thailand, NASA officials said.

"I am very happy to be part of a great milestone for SOHO's comet project," Boonplod said in a statement. "I would like to thank SOHO, ESA and NASA for making this opportunity possible, including other fellow comet hunters who I have learned a lot from." [Sungrazing Comets: How They Dive-Bomb the Sun (Infographic)]

Boonplod is one of many laypeople around the world who sift through SOHO's data in search of comets. Indeed, 95 percent of the spacecraft's comet discoveries have been made by such citizen scientists, NASA officials said.

"The people who have found comets represent a very broad cross section, as the program is open to anyone who has interest," solar scientist Karl Battams, of the Naval Research Laboratory in Washington, D.C., who has run the SOHO comet-sighting website since 2003, said in the same statement. "There are scientists, teachers, writers. We have even had two 13-year-olds."

But SOHO has also proven extremely proficient at discovering and tracking "sungrazing" comets, which veer close to the sun (and sometimes plunge into the star).

"SOHO has a view of about 12.5 million miles [20.1 million kilometers] beyond the sun," said SOHO mission scientist Joe Gurman, of NASA's Goddard Space Flight Center in Greenbelt, Maryland. "So we expected it might from time to time see a bright comet near the sun. But nobody dreamed we'd approach 200 a year."

Studying sungrazers can reveal insights about the solar system's early days, because comets are relics from the planet-forming period 4.5 billion years ago, NASA officials said. And tracing their paths around and near the sun can help researchers learn more about the solar magnetic field and the solar wind.

Before SOHO's launch two decades ago, just 12 comets had been discovered by spacecraft, and a mere 900 others had been found by ground-based instruments, officials said.