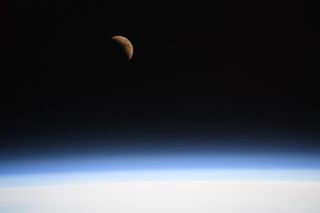 There is an enduring debate over capitalizing the "m" in Earth's moon. Some organizations, like NASA, have the letter capitalized in their style guides. However, the Associated Press (AP) stylebook, considered the gold standard for setting style guidelines in journalism, downgrades our celestial next-door neighbor to a small "m."

Will this brouhaha over editorial rules ever be resolved? Key individuals make their cases, both upper and lower.

"The AP Stylebook decision to lowercase 'sun' and 'moon' was made years ago, so I can't speak to the discussions that were held then," AP Stylebook editor Paula Froke told Space.com. (Space.com follows AP style, which is why you see "sun" and "moon" in our stories.)

"The current Stylebook and AP science teams know that many believe 'moon' should be capitalized," Froke said, "and many believe it should be lowercased. For now, we see no reason to change our longtime style. We would argue that the moon is a 'thing,' not a thing named 'Moon.'"

NASA has a different point of view, which the agency lays out in its Style Guide for NASA History Authors and Editors:

"Capitalize the names of planets (e.g., 'Earth,' 'Mars,' 'Jupiter'). Capitalize 'Moon' when referring to Earth's Moon; otherwise, lowercase 'moon' (e.g., 'The Moon orbits Earth,' 'Jupiter's moons'). Capitalize 'Sun' when referring to our Sun but not to other suns. Do not capitalize 'solar system' and 'universe.' Another note on usage: 'Earth,' when used as the name of the planet, is not preceded by 'the'; you would not say 'the Neptune' or 'the Venus.' When 'earth' is lowercased, it refers to soil or the ground, not the planet as a whole. Do use 'the' in front of 'Sun' and 'Moon' as applicable."

That is the question, wrote lunar expert Paul Spudis in a 2009 article for Air & Space magazine. Spudis was a senior staff scientist at the Lunar and Planetary Institute in Houston. He passed away in 2018.

"Interestingly, the AP Stylebook says to capitalize the Earth but not the Sun and Moon," Spudis wrote. "My guess is that some classically educated nitpicker who was forced to sit through endless hours on the joys of the ablative absolute in Latin class decided that the Roman-named objects of the universe were worthy of linguistic worship but the vulgar, barbarian Germanic names given to those other three bodies did not deserve to be capitalized."

"When referring to 'the Moon' — that is, our Moon, Luna, site of Neil Armstrong's landing in 1969 — the word should be capitalized," he wrote. "When referring to any moon, such as in 'the moons of Jupiter,' it becomes a generic descriptor and hence, should not be capitalized. Our Moon is a world with its own history, one intimately entwined with our own. It has the material and energy resources needed to help us bootstrap a true spacefaring capability. It will one day become a second home for humanity."

Retired NASA lunar expert Wendell Mendell, a planetary scientist with a doctorate in the field and 50 years of experience with the space agency, weighed in on the debate as well.

Mendell, among others, has been cognizant of a firestorm of letters from planetary scientists that appeared in email threads on this issue.

For nonscientific individuals, Mendell said, "moon" is a noun referring to a unique object venerated for its romantic connotations.

But "for a planetary scientist, it can be any one of hundreds of moons in the solar system, each one of which has a name," Mendell said. "The name in English for the principal satellite of Earth is 'the Moon.' This is the term used in professional papers and is so designated by the manual of the United States Government Printing Office, Section 3.31. It is listed in the style sheet of the American Geophysical Union for submitted manuscripts. The rule is similar for 'the Sun' when referring to the prominent star in our sky to distinguish it from billions of suns in the universe."

"This is simple English," said Clive Neal, a lunar authority at the Department of Civil and Environmental Engineering and Earth Sciences at the University of Notre Dame in Indiana.

"The name of Earth's only natural satellite is 'the Moon' — it is a proper noun, so it is spelled with a capital 'M.' End of story," Neal told Space.com.

If organizations profess to follow the English language, the Moon always has a capital 'M,' he added.

"Otherwise, they follow a language I am not familiar with," Neal said. "The Associated Press (AP) does not follow the English language (note: no capital letters!)," he said. "Phobos is a natural satellite of Mars — a moon. The Moon is the only natural satellite of Earth — it is a moon of Earth called the Moon."

Even Apollo-era engineers are piping up on the issue.

"Several of us Apollo veterans would like to point out that everyone should always capitalize the name of our nearest extraterrestrial neighbor, the 'Moon.' NASA does this in all of their web references. I hope that others will soon also accept this important and accurate way of portraying the Moon," said Ron Creel, an Apollo Lunar Roving Vehicle team member.

"It just makes us cringe whenever we see the name of our nearest celestial neighbor not capitalized," Creel said. "Someone at NASA must have felt the same way. To heck with the AP. What do they know?"

Leonard David is the author of the book, "Moon Rush: The New Space Race," which was published by National Geographic in May 2019. A longtime writer for Space.com, David has been reporting on the space industry for more than five decades. Follow us on Twitter @Spacedotcom or Facebook.