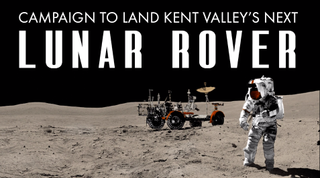 Last week, the city of Kent in Washington recognized the moon buggies left on the moon during Apollo 15, 16 and 17 as a historic landmark.
(Image: © City of Kent)

Last week, by a unanimous vote, the city of Kent, Washington, designated the lunar rovers, or "moon buggies," from Apollo 15, 16 and 17 as historic landmarks.

The rovers, which were built and tested at the Boeing Space Center in Kent, remain on the moon but have earned landmark status in the city thanks to a vote by the King County Landmarks Commission. This makes Washington only the third state, after New Mexico and California, to have lunar objects in its state historic register. Officials from the city of Kent said they hope that the rovers will next earn landmark recognition by the entire state of Washington.

"It's a way for us to celebrate the history of the lunar rover in Kent and make sure the generations coming up understand that history," Kent Mayor Dana Ralph told Space.com, adding that the landmark status might inspire young people to get involved in the space sector.

Ralph added that Kent officials also hope the designation will one day protect the rovers on the moon from possible interference during future missions. "It's a layer, at least a thin layer, of protection," Ralph said.

The moon buggies are an important piece of lunar history, Boeing archivist and historian Mike Lombardi told Space.com. "The lunar rovers, they were a critical part of the last Apollo missions, what they called the 'J missions,' and they were basically for scientific exploration. So NASA wanted to have the ability for the astronauts to cover a larger area of the lunar surface," he said.

Boeing, with the company's role in creating the lunar rovers, has been very supportive of the landmark designation, Lombardi expressed. "We're very proud at Boeing, were very proud of the lunar rover. The program is a great representation of what Boeing can do," Lombardi said.

Kent is also fundraising to build an interactive replica of a lunar rover in one of the city's parks, Ralph said. The city is still finalizing the details of the installation and how visitors might interact with it, but Ralph said that it will be a full-sized model of the lunar rover.

The city of Kent has a number of ties to the space sector. In addition to housing the Boeing Space Center, Kent is also the birthplace of Blue Origins and home to the company's headquarters, and rumors have suggested that SpaceX will build a satellite branch in the city.