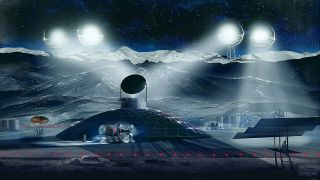 Commercial use of water ice near the moon's poles will provide access to a supply line of in-space propellant, mining advocates say.
(Image: © James Vaughan)

Off-Earth miners will probably leave their pickaxes at home.

The best way to extract water from the moon and near-Earth asteroids involves hitting the stuff with sunlight or other forms of radiation, if three NASA-funded projects are any guide.

And getting at this water is vital if humanity wants to extend its footprint beyond Earth's orbit, mining advocates say. Water provides life support for astronauts, of course, but it can also be split into its constituent hydrogen and oxygen, the chief components of rocket fuel. So, moon and asteroid mining could lead to the construction of off-Earth propellant depots, which would allow voyaging spacecraft to fill their tanks on the go.

"Everyone's starting to realize that water will be the oil of space industrialization," Joel Sercel, the founder and CEO of California-based TransAstra Corp., told Space.com.

TransAstra is working to prime the pump: This year, two of the company's projects were given funding from the NASA Innovative Advanced Concepts (NIAC) program, which seeks to spur the development of potentially game-changing exploration technologies.

The floors of these craters are in permanent shadow, and have been for billions of years. Indeed, that's why they harbor so much ice; they've served as "cold traps" since shortly after the moon's birth. But these craters' rims are in near-constant sunlight. And, in many cases, these rims aren't too high up — just 330 feet (100 meters) or less off the crater floor.

"In these prospective landing sites, deployable solar arrays held vertically on masts 100 m or so in length (lightweight and feasible in lunar gravity) can provide nearly continuous power," the LPMO description on the NIAC website reads.

So, the description adds, a large lander or medium-size mining outpost "could sit on mineable permafrost with solar arrays in perpetual sunlight on masts providing affordable electric power without the need to separate power supply from the load."

The mining work would be done by electrically powered rovers, which would beam a combination of radio-frequency, microwave and infrared light into the dirt beneath their wheels. The radiation would vaporize water ice, causing it to migrate upward into "cryotraps" aboard the rovers.

A mining rover sized to launch atop NASA's huge Space Launch System rocket or Blue Origin's New Glenn booster, both of which are in development, would likely weigh between 2 and 5 tons, and be capable of harvesting between 20 and 100 times its own mass in water every year, TransAstra representatives said.

"LGMO promises to vastly reduce the cost of establishing and maintaining a sizable lunar polar outpost that can serve first as a field station for NASA astronauts exploring the moon, and then as the beachhead for American lunar industrialization, starting with fulfilling commercial plans for a lunar hotel for tourists," the LMPO description reads.

This latter method involves bagging up a suitable near-Earth asteroid, then using concentrated sunlight to ablate and fracture the rock, releasing its stores of water. APIS describes the family of spacecraft that will do such work, ranging from a "Mini Bee" technology demonstrator in low-Earth orbit (LEO) to a "Queen Bee" vehicle capable of capturing and mining a 130-foot-wide (40 m) space rock.

A chief goal of the Phase 3 NIAC work is to get the Mini Bee ready to fly, so that the team can propose a demonstration-mission launch to LEO, Sercel said.

Radiation is also the extractive force envisioned by another of this year's NIAC awardees. A team led by George Sowers of the Colorado School of Mines received a Phase 1 NIAC to investigate the potential of "thermal mining" on the moon and other cold bodies throughout the solar system.

Thermal mining could redirect sunlight onto an object's surface, or it could target the subsurface via buried conducting rods or heating elements, the project's NIAC page reads.

"One of our main objectives is to create icy-regolith simulants and test the effectiveness of these various heating methods in our cryogenic vacuum chamber," Sowers said during a presentation in June with NASA's Future In-Space Operations (FISO) working group.

Sowers laid out a potential moon-mining architecture during his FISO talk, which was primarily focused on the economics of moon mining. Heliostats (mirrors that track the sun's movement) on the rims of polar craters could bounce sunlight down to the floors, onto the optics-equipped roofs of "capture tents."

This concentrated sunlight — perhaps aided by buried heaters — would cause subsurface ice to sublimate into water vapor, which would then be captured.

The basic idea has great potential, Sowers and his team believe. "Estimates for extracting water from the permanently shadowed regions of the moon show thermal mining can produce industrial quantities of water (for propellant) for 60% less mass and energy than excavation," the project's NIAC description reads.

So, perhaps humanity's expansion beyond low-Earth orbit, and the emergence of a true off-planet economy, will be driven by solar power, at least in its early stages. Space mining will start with water, after all, but it likely won't end there.

"Once we learn to mine propellant from asteroids, it becomes cost-effective to mine metals," Sercel said.