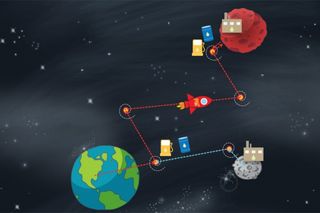 An illustration depicts how a Mars mission may benefit from fuel stations on the moon.
(Image: © Christine Daniloff/MIT)

Humanity's most efficient path to Mars includes a pit stop near the moon, a new study suggests.

Mars-bound crewed spacecraft should launch with just enough fuel to get to filling stations near the moon, and these stations would then dispense propellant derived from lunar water-ice, according to the study.

Such a strategy would reduce the mass of a Mars mission by up to 68 percent at launch, resulting in significant cost savings, researchers said. (It currently costs thousands of dollars to put 1 lb., or 0.45 kilograms, of payload into Earth orbit.) [Visions of Deep-Space Exploration in Pictures]

"This is completely against the established common wisdom of how to go to Mars, which is a straight shot to Mars, carry everything with you," study co-author Olivier de Weck, a professor of aeronautics and astronautics and of engineering systems at the Massachussets Institute of Technology (MIT), said in a statement.

"The idea of taking a detour into the lunar system … it's very unintuitive," de Weck added. "But from an optimal network and big-picture view, this could be very affordable in the long term, because you don't have to ship everything from Earth."

Permanently shadowed craters near the moon's poles are thought to harbor large quantities of water ice. This ice can be processed into hydrogen and oxygen molecules — the chief components of rocket fuel, which could then be used to fill up the tanks of voyaging spaceships.

Exploiting lunar resources in this way could greatly reduce the cost of spaceflight, helping open up the solar system to human exploration, moon-mining advocates say.

The new study, which was published recently in the Journal of Spacecraft and Rockets, comes to the same basic conclusion.

The researchers — led by Takuto Ishimatsu, now a postdoc at MIT — developed mathematical models to determine the most efficient ways to get humans to Mars. The scientists found that the best option relies on "gas stations" positioned at gravitationally stable places in the Earth-moon system called Lagrange points. The fuel doled out at these depots would come from lunar water-ice.

The first crewed trip to Mars may not utilize this infrastructure, but such a system could help pave the way for Red Planet settlements, researchers said.

"Our ultimate goal is to colonize Mars and to establish a permanent, self-sustainable human presence there," Ishimatsu said in the same statement. "However, equally importantly, I believe that we need to 'pave a road' in space so that we can travel between planetary bodies in an affordable way."

The new study has caught the attention of NASA, which aims to put boots on Mars in the 2030s.

"The paper shows clearly that leveraging water and other valuable in-space resources will lower the cost for human exploration of the solar system," William Gerstenmaier, associate administrator for human exploration and operations at NASA Headquarters in Washington, D.C., said in the same statement.

"NASA had previously planned on using Mars resources to reduce propellant needs at Mars," added Gerstenmaier, who was not involved in the paper. "This study, along with others, is showing the potential advantages of using lunar resources as well."