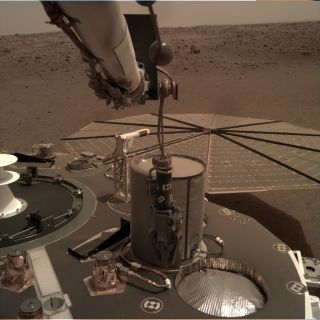 In this image, captured by InSight's Instrument Deployment Camera on Feb. 7, one of the lander's pair of white weather-station towers, with the temperature and wind sensors extended horizontally to the right, is visible below the robotic arm.
(Image: © NASA/JPL-Caltech)

We take daily weather reports for granted here on Earth, but their mundane utility just got some out-of-this-world competition from NASA's InSight mission, which is now providing reports on temperatures and wind speeds from its home at Elysium Planitia.

The lander is equipped with sophisticated weather-monitoring equipment on account of one of its instruments, an ultrasensitive seismometer that scientists will use to see inside the planet. But that device is so sensitive that it could mistake gusts of wind for elusive so-called marsquakes — which is why scientists need to track the weather, second by second, on Mars.

"It gives you the sense of visiting an alien place," Don Banfield, chief meteorologist for InSight and a planetary scientist at Cornell University in New York state, said in a statement. "Mars has familiar atmospheric phenomena that are still quite different than those on Earth." [Mars InSight in Photos: NASA's Mission to Probe Core of the Red Planet]

The InSight team has assembled a website hosting the mission's weather data, including daily high and low temperatures, wind speeds and directions, and air pressure information. The data date back to Feb. 11, which was InSight's 75th day on the Martian surface; it takes a day or two from the end of a Martian day for data to become available on the website.

InSight is located on a flat plain called Elysium Planitia, where it's currently winter — and the reported temperatures are suitably chilly, with no daily high cracking 15 degrees Fahrenheit (minus 9 degrees Celsius). Average temperatures are reliably in the minus 80s F (minus 60s C), with lows as frigid as minus 140 F (minus 95 C).

That's not counting the windchill, and the gusts on Elysium Planitia are clocking in as high as 37.8 mph (17 meters per second).

All of this data isn't just designed to make the Northern Hemisphere's winter on Earth seem a little less grim: The information also plays a crucial role in InSight's science mission. Scientists will use the temperature, air pressure and wind information to ensure that the motion the lander's seismometer detects is really coming from below the Martian surface.

That said, scientists are already spotting plenty of intriguing meteorological phenomena in the data they've seen so far. For instance, they've noticed how straightforward pressure changes are on Mars versus those in Earth's atmosphere. "Compared to Mars, Earth is pretty chaotic," Banfield said in a different statement. "It's a very regular seesaw guided by a metronome on Mars. On Earth, the pressure is guided by a hyperactive child."

Other phenomena seem to be more dramatic on Mars compared to Earth. Scientists already knew about what they've called dust devils — large spiraling gusts of dust — on Mars. But researchers hadn't expected the features to be as large or violent as they are at InSight's location, where the devils have literally tilted the ground beneath the seismometer.