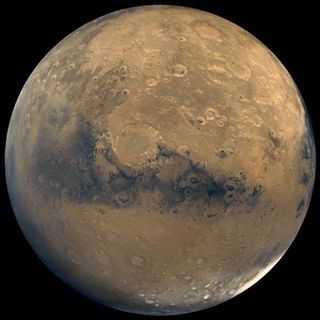 This global view of Mars consists of about 100 Viking Orbiter images.
(Image: © NASA/JPL-Caltech)

Mars seems to be on everybody's mind in the space industry. There are already several robotic missions to the Red Planet underway, and companies and space agencies are already working to one day send humans there.

But a crewed mission would present many more challenges. One of these obstacles is radiation, and so researchers are working to find a way to protect a crew against the dangerous radiation of deep space.

Humans evolved underneath the protective blanket that is the Earth's atmosphere and magnetosphere. Our bodies are not like the robots we shoot into the far reaches of the solar system. We are made of organic matter that needs to be shielded from harmful radiation.

Radiation comes from waves of energy. There is radiation around us all the time — even bananas, which are rich in potassium, emit radiation — but the amount of radiation we're exposed to on a regular basis is so low that our body copes fine with it. However, some waves of energy can damage our cells and our DNA faster than our body can repair the damage. These harmful waves are part of the electromagnetic spectrum that includes gamma rays, x-rays and some ultraviolet radiation. That's why health officials advise that people use sunscreen and why medical staff use protective blankets when patients receive X-ray exams.

Tory Bruno, CEO of the spaceflight company United Launch Alliance, spoke about radiation and the challenges it poses to a U.S. Mars-shot during a Feb. 28 presentation held at the Johns Hopkins Applied Physics Laboratory (APL) in Maryland. The chat was part of an all-day event called the Lunar Surface Innovation Consortium, where NASA officials, APL representatives and space industry leaders spoke about how NASA's Artemis program could unfold over the course of the decade.

Artemis' primary goal is to send a crewed mission back to the moon, with the first woman and the next man to land on the lunar surface on board. In its following chapter, Artemis would help engineers learn more about the deep space environment to safely send humans on long-duration missions to Mars.

Bruno said that NASA is already getting a head start on these missions by studying the sun more intently. Missions like NASA's Parker Solar Probe, which launched in 2018, and a collaboration with the European Space Agency on the Solar Orbiter, which launched earlier this year, could inform the design and the timing of Mars missions based on the sun's cycles of activity by gauging when the sun is emitting levels of radiation higher than average.

In the presentation, Bruno outlined the traditional materials —— water, concrete, lead —— that are used as a containment barrier against radiation. But rockets aren't made of this stuff.

"We're going to need some new materials that are a lot more efficient at shielding out this radiation… but nothing that we could use today to safely send people to the Red Planet and back," Bruno said.

Although crew capsules have been sending people into space for over half a century, spacefarers haven't had to endure missions as long as what a mission to Mars would require.

Astronauts on the International Space Station don't have to worry a tremendous amount about radiation because most individual missions last six months to under a year. A roundtrip mission to Mars would require about 180 days, according to Bruno, and sending people to the Red Planet would only be worthwhile if they could spend weeks, months or even a full year there to explore Mars' environment.

It's hard to study this radiation environment from Earth —— sending experiments to the moon and to Mars and making rigorous observations will be essential to sending the first humans to Mars.