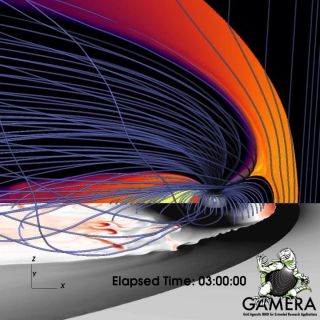 An image from a magnetohydrodynamic simulation by the Gamera project at the Johns Hopkins Applied Physics Laboratory shows bursty flows (in red and brown) in the plasma sheet.
(Image: © K. Sorathia/JHUAPL)

Auroras and satellite function might be influenced by ''bubbles'' of plasma near the tail of Earth's magnetosphere, researchers find.

The sun continuously emits what is known as "the solar wind," a stellar breeze that can travel 1 million mph (400 kilometers per second) through space. On Dec.15, 2019, researchers published a new study that investigated the vibrations and "bubbles" that the solar wind creates within Earth's magnetically charged shell, and how it shows up on Earth's night side.

This turbulence creates complex effects, including many different types of waves. For this study, physicists at Rice University developed a new method to study the disturbances, or oscillations, that occur in the plasma at the base of the magnetosphere..

The Rice University physicists collaborated with researchers at the Applied Physics Laboratory at Johns Hopkins University to develop a code to help them run simulations about these oscillations, or "ripples." An algorithm known as the Rice Convection Model, which Rice officials say is "decades in the making," played a part in this magnetospheric code. The algorithm is called Gamera after the fictional Japanese monster of the same name.

Earth's magnetosphere is shaped a bit like the cross section of a wing. The side of the magnetosphere facing away from the sun — Earth's nightside — is where you have the pointed tail of the wing and where "burst bubbles" of plasma get caught and sink back toward Earth, creating ripples within the plasma.

The ripples move like a plucked guitar string that quickly returns to equilibrium, Frank Toffoletto, space plasma physicist at Rice University and lead author of the new study, said in the statement.

These low-frequency waves, called eigenmodes, haven't been studied much but "appear to be associated with dynamic disruptions to the magnetosphere" that cause phenomena like beautiful auroras, or less-appealing events, like disruptions to satellites and power grids here on Earth.

This new research was published on Dec. 15 in the journal JGR Space Physics.