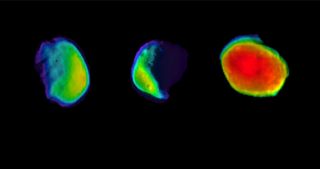 Images of Mars' moon Phobos taken by NASA's Mars Odyssey spacecraft show heat building up on the surface as the moon becomes full. The warmest parts in the right-most image are about 80 degrees Fahrenheit (27 degrees Celsius).
(Image: © NASA/JPL-Caltech/ASU/SSI)

New images of one of Mars' moons show a sweet surprise: It looks like candy.

The moon, Phobos, shines like a rainbow-colored jawbreaker in the images, which NASA's Mars Odyssey spacecraft took in infrared (heat-vision) wavelengths on April 24.

NASA's science goal is to learn what materials make up Phobos — which in turn, may eventually tell researchers where the moon came from. The infrared camera on Odyssey, called the Thermal Emission Imaging System (THEMIS), can sense changes in the moon's surface temperature.

Related: Moons of Mars: Amazing Photos of Phobos and Deimos

That temperature changes as Phobos orbits Mars, which occurs every 7 hours. But the temperature also varies depending on the minerals and textures at the surface of the object. Full-moon views by THEMIS best show the composition of minerals, while half-moon views are better for examining surface textures.

"This new image is a kind of temperature bull's-eye — warmest in the middle and gradually cooler moving out," Jeffrey Plaut, Odyssey project scientist at NASA's Jet Propulsion Laboratory in California, said in a statement. "Each Phobos observation is done from a slightly different angle or time of day, providing a new kind of data."

So what's buried inside Phobos? The moon has iron and nickel in it, but scientists are still working to better understand the abundance of these metals and the minerals around them. That could be key to learning this moon's origin story.

In particular, scientists hope to figure out whether the moon was a stray asteroid that wandered too close to escape the Martian gravity or whether an ancient impactor hit Mars and flung surface materials into orbit that coalesced to form Phobos.

The new images can also help future science missions. Japan is discussing a sample-return mission to both Red Planet moons that would launch in the mid-2020s and fetch material for analysis back on Earth. The moon has even been suggested as a possible predecessor to a crewed mission to Mars proper. THEMIS data will give landers headed to Phobos a better idea of what locations are safe.

"By studying the surface features, we're learning where the rockiest spots on Phobos are and where the fine, fluffy dust is," Joshua Bandfield, a THEMIS co-investigator and senior research scientist at the Space Science Institute in Colorado, said in the same statement. "Identifying landing hazards and understanding the space environment could help future missions to land on the surface."