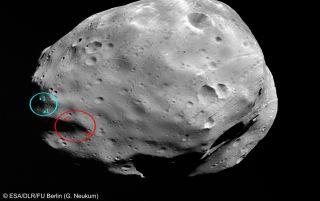 This picture of Phobos shows two possible landing sites for the Russian Phobos-Grunt mission. The oval in red marks a spot that was previously being considered, while the blue oval denotes the currently favored landing site.
(Image: © ESA/DLR/FU Berlin (G. Neukum))

The two moons of Mars, Phobos and Deimos, are in the sights of planners of both human and robotic spaceflights.

Last year NASA began targeting a mission to Mars, as decreed by President Barack Obama. "By the mid-2030s, I believe we can send humans to orbit Mars and return them safely to Earth. And a landing on Mars will follow. And I expect to be around to see it," he said in April 2010 during an address at NASA's Kennedy Space Center in Florida.

In response, one idea now percolating within the space engineering community has been scripted by Lockheed Martin Space Systems. The company near Denver has taken a longing look at its own Orion spacecraft under development and missions beyond low-Earth orbit. A result is a proposed mission called Project Red Rocks to explore the outermost moon of Mars, Deimos, as the penultimate step toward setting human foot on the Red Planet. [Why Haven't We Colonized Mars Yet?]

"Sending astronauts to Deimos will demonstrate key technologies that will be needed for subsequent human Mars landings," explains a fact sheet from the company provided to SPACE.com.

The best near-term opportunities to send humans toward Mars will be in 2033 and 2035, thanks to orbital mechanics that permit propulsion needs and re-entry speeds to be at their lowest.

Simultaneously, the sun's magnetic field will be at the strongest phase of its 11-year cycle. That means astronauts will be afforded the most protection from cosmic radiation, according to the aerospace firm's planners.

Say it's the 2033 mission. Some equipment and supplies could be launched in January 2031 and deployed to Mars orbit ahead of time. A Deimos-bound crew would then say goodbye to Earth in 2033, spend 18 months orbiting Mars and then return to their home planet in November 2035.

Deimos turns out to come with a complimentary sweet spot.

A site near the "arctic circle" on Deimos offers 10 months of continuous sunlight during Martian summer, enabling the use of simple solar power systems.

Astronauts also would have direct line-of-sight to Earth and to rovers on the surface of Mars, simplifying communication, according to the Lockheed Martin fact sheet.

During Martian winter, a similar site in the southern hemisphere is continuously sunlit. A cryogenic propulsion stage for Earth return could be stored in the cold shadows of a large south pole crater on Deimos.

From orbit, astronauts would control sample-collecting rovers on the Red Planet. Being in the neighborhood, so to speak, crews could operate the rovers without the speed-of-light delay and limited bandwidth that hinder Earthbound controllers. [The Best (and Worst) Mars Landings]

"Sending astronauts to Deimos will demonstrate key technologies that will be needed for subsequent human Mars landings, such as reliable life-support recycling systems, long-term cryogenic propellant storage, and the biomedical technology to protect astronauts from the effects of microgravity and space radiation," according to the Lockheed Martin handout.

The fact sheet adds that a Deimos mission would be much easier and more affordable "because it postpones the development of difficult technologies needed only for Mars landings, such as nuclear power, lightweight space suits, biological containment to prevent interplanetary contamination, and advanced re-entry systems for landing large spacecraft."

By staying farther out of the Mars gravity well also would reduce the mission's propulsion requirements. A human sojourn to Deimos would not require advanced propulsion or fancy aerocapture technologies such as diving into Mars' atmosphere to decelerate would require. Lastly, such an expedition could be lofted via fewer heavy-lift rockets from Earth.

The Destination Deimos Plan is part of Lockheed Martin's "Stepping Stones" series, geared toward establishing traveling capability beyond low-Earth orbit in incremental steps. Detailed looks at a mission over the far side of Earth's moon, as well as to explore an asteroid, also have been blueprinted under the program.

"Each mission is designed to incrementally build up capabilities for the next mission and address scientific questions about a common theme: the origins and formation of our solar system," Hopkins told SPACE.com. "The Red Rocks mission builds on each of those prior missions, and it, in turn, lays the groundwork for an eventual human landing on Mars."

Taking a look into the future of humans planted on Deimos, Hopkins said the view of Mars from that moon will be spectacular. For instance, Olympus Mons – the large volcanic mountain on Mars – would appear about three times wider than the full moon does from Earth, he said.

Hopkins said the challenges and new technologies involved in a human Mars landing can be divided into two groups.

"There are things required for the interplanetary trip in space from Earth to Mars and back, and then there are the challenges specific to actually landing and operating on Mars itself," Hopkins said. "A trip to Deimos is very similar to the in-space parts of a trip to Mars in terms of distance, duration, and environment."

The Red Rocks mission would lay the groundwork for the Mars mission, Hopkins suggested, by figuring out things like how to protect the astronauts from the effects of long-term zero-G exposure and deep-space radiation, how to build reliable water recycling systems, and how to keep astronauts happy and healthy when they are very isolated and living in a small habitat.

Both moons of Mars are becoming increasingly attractive targets.

Later this year, Russia is set to lob Mars-ward its Phobos-Grunt spacecraft, which also carries China's Yinghuo Mars orbiter. Phobos-Grunt is Russia's bold venture to robotically land on Phobos and bring back a soil sample.

That mission was spotlighted at the Second International Conference on the Exploration of Phobos and Deimos, held in March at the NASA Ames Research Center near San Francisco.

"Phobos and Deimos will be our destinations in Mars orbit. They can be reached much sooner and at much lower cost than the surface of Mars itself," said Pascal Lee, chairman of the Mars Institute and convener of the conference.

"They are natural space stations in Mars orbit, ready for us to occupy, and from there we can efficiently explore the Red Planet," Lee told SPACE.com.

Lee also sees the Mars moons helping to ensure that no nasty biology from the Red Planet makes its way back into our biosphere. As offshore islands of Mars, he said, both Phobos and Deimos offer stable and sterilizing orbital platforms where samples collected on Mars could be quarantined, processed and examined prior to their return to Earth.

In Lee's view, in addition to being the gateways to Mars, Phobos and Deimos are exciting worlds in their own right. He added that the natural twosome of Mars satellites have long drawn our notice.

"We still do not know what Phobos and Deimos are," Lee emphasized. Are they perhaps captured asteroids … or remnants of Mars's own formation? Reassembled impact debris from Mars? Given their extremely low densities, Phobos and Deimos must have very porous interiors. Might these pores be rich in water ice?

"There will be much for humans to do on them, and to learn about Mars from Phobos and Deimos," Lee concluded.