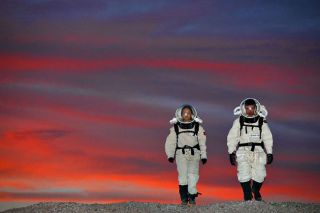 The sun sets behind two members of a mock Mars mission for one of the Mars Society's Mars Desert Research Station expeditions.
(Image: © The Mars Society.)

Humanity has been flying in space for 50 years now, but we are still confined to a single planet — Earth.

If it took only eight years to go from no humans in space to the first man on the moon, why haven't humans colonized Mars and other worlds yet? Or at the least the moon?

"NASA's plan as of 1969 was to have a human Mars mission by 1981, a permanent moon base in the '80s and a permanent Mars base in 1988," said Robert Zubrin, president and founder of the Mars Society.

Interplanetary human voyages pose definite scientific and technological challenges. One would have to deal with the rigors of travel — issues of food, water and oxygen, the deleterious effects of microgravity, potential hazards such as fire and radiation and the fact that any such astronauts would be millions of miles away from help and confined together for years at a time. Landing, working, living and returning from another planet would offer a host of challenges as well. [Vote! The Best Spaceships of All Time]

Still, the main reason that people have not yet voyaged past the orbit of the moon is mostly a political one.

The era of human spaceflight began on April 12, 1961, when the Soviet Union shocked the world by launching cosmonaut Yuri Gagarin, the first man in space, into orbit. At the time, the so-called Space Race was under way, with the United States and Soviet Union both working to land a human on the moon first. That race ended with NASA's historic Apollo 11 moon shot, which landed astronauts Neil Armstrong and Buzz Aldrin on the lunar surface on July 20, 1969.

"The Cold War is over," said Bill Nye, executive director of the Planetary Society.

Back in the early days of human spaceflight, the United States and Soviet Union were locked in the Cold War, a life-or-death struggle that spurred the space race for control of the ultimate high ground.

Since then, however, "we've had a major failure of political leadership in this country when it came to human spaceflight," Zubrin said. "It'd be like Columbus coming back from America and Ferdinand and Isabella saying, 'so what?'"

A question of will

Although one "can talk forever about the technical problems, those are red herrings," Zubrin said. "You can talk about the risk of being exposed to radiation in space for years, but cosmonauts have already had larger cosmic ray doses at the International Space Station and Mir. This isn't a question of technical challenges — it's a question of will." [The Best (and Worst) Mars Landings]

"You can say it's risky, but imagine all the risks human spaceflight faced in the beginning," Zubrin said. "When Kennedy gave his speech in May of 1961 about putting a man on the moon, we had 15 minutes of human spaceflight experience, and yet we went."

"My uncle landed on Normandy beach," Zubrin said. "They didn't hold up the Normandy landing until they knew it was safe. If you're going to wait to go to Mars until it's going to be safe, you're never going to Mars."

The goal now "is toget people to realize the value of human spaceflight," Nye said. "When we explore with robots, we make discoveries, but not nearly as fast as with people, and not in the same engaging way."

"This is really a challenge of who we are, what kind of people we are," Zubrin said. "Are we willing to accept challenges and embrace risk? Or are we ultimately resigning from our role as a nation of pioneers?"