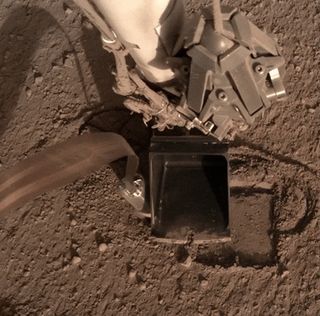 The InSight mars lander's burrowing heat probe, known as "the mole," has been stuck in the red dirt since February 2019. But it moved a bit recently, raising hopes that it may eventually be able to get down to its target depth.
(Image: © NASA/JPL-Caltech/DLR via Twitter)

There's new hope for the mole.

The burrowing heat probe aboard NASA's InSight Mars lander got stuck in the red dirt in February, long before reaching its target depth of 10 to 16 feet (3 to 5 meters). Ever since, engineers at NASA and the German Aerospace Center, which built the mole, have been working to get it moving again.

And they've made some progress recently.

"Good news from #Mars! Confirmed! After 3 cm progress, it appears the @DLR_de 'Mole' on @NASAInSight was not stopped in its tracks by a rock under the Martian surface but had in fact lost friction. #MarsMaulwurf," representatives from the German Aerospace Center, which is known by its German acronym, DLR, said via Twitter yesterday (Oct. 14).

Good news from #Mars! Confirmed! ✅ After 3 cm progress, it appears the @DLR_de ‘Mole’ on @NASAInSight was not stopped in its tracks by a rock under the Martian surface but had in fact lost friction. #MarsMaulwurf pic.twitter.com/WGQYdSv7FFOctober 14, 2019

The mole, which is part of the Heat Flow and Physical Properties Package (HP3) instrument, needs some friction to dig; otherwise, it will just bounce in place. And re-establishing and maintaining friction may be a solvable problem, unlike an unlucky run-in with a big, buried boulder — the other leading explanation for the mole's halted progress.

HP3 is one of two main science instruments aboard InSight, which touched down near the Martian equator in November 2018. The other one is a suite of incredibly sensitive seismometers that are designed to detect and characterize marsquakes.

The seismometers have picked up more than 100 events to date. Mission team members have identified 21 of those as marsquakes, and many of the others could be as well; analysis of the otherworldly audio catalog continues.

The InSight team is using such data to create a detailed 3D map of the Martian interior, which in turn will reveal key details about how rocky planets form and evolve, NASA officials have said. (The mission's name is short for "Interior Exploration using Seismic Investigations, Geodesy and Heat Transport," after all.)

That map might be even better if the mole can get down to its prescribed depth. Right now, the instrument is about 14 inches (35 centimeters) beneath the Martian surface.