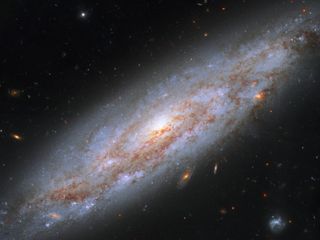 The Hubble Space Telescope snapped this image of the spiral galaxy NGC 3972. The galaxy is 65 million light-years from Earth (that's 382 quintillion miles!) and can be found in the constellation Ursa Major.
(Image: © NASA/ESA,/A. Riess (STScI/JHU))

On the scale of the universe, measuring distances in miles or kilometers doesn't cut it. In the same way that you may measure the distance to the grocery store in the time it takes to drive there ("The grocery store is a 15-minute drive away"), astronomers measure the distances of stars in the time it takes for light to travel to us. For example, the nearest star to our sun, Proxima Centauri, is 4.2 light-years away.

How far is a light-year?

Measuring in light-years also allows astronomers to determine how far back in time they are viewing. Because light takes time to travel to our eyes, everything we view in the night sky has already happened. In other words, when you observe something 1 light-year away, you see it as it appeared exactly one year ago. We see the Andromeda galaxy as it appeared 2.5 million years ago. The most distant object we can see, the cosmic microwave background, is also our oldest view of the universe, occurring just after the Big Bang some 13.8 billion years ago.

Astronomers also use parsecs as an alternative to the light-year. Short for parallax-second, a parsec comes from the use of triangulation to determine the distance of stars. To be more specific, it is the distance to a star whose apparent position shifts by 1 arcsecond (1/3,600 of a degree) in the sky after Earth orbits halfway around the sun. One arcsecond is equal to 3.26 light-years.

Like degrees, the light-year can also be broken down into smaller units of light-hours, light-minutes or light-seconds. For instance, the sun is more than 8 light-minutes from Earth, while the moon is just over a light-second away. Scientists use these terms when talking about communications with deep-space satellites or rovers. Because of the finite speed of light, it can take more than 20 minutes to send a signal to the Curiosity rover on Mars.

Whether it's light-years or parsecs, astronomers will continue to use both to measure distances in our expansive and grand universe.