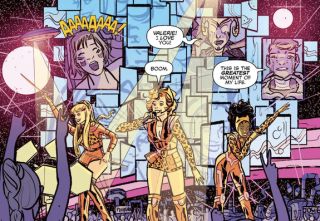 Josie and the Pussycats are heading into outer space in a new digital-first series.
(Image: © Archie/comiXology)

Josie and the Pussycats are heading into outer space in a new digital-first series debuting on comiXology, as announced via ScreenRant.

Written by Alex de Campi with art from Devaki Neogi, Josie & The Pussycats in Space will run for five issues, starting Oct. 23.

The story sends Josie and the band to space for a USO tour which turns into a sci-fi fueled mystery.

Related: The 20 Weirdest Aliens in the Marvel Universe

""I have a great love for all the Archieverse characters and their history — as anyone who’s picked up Archie vs Predator I or II will know — and wow, I did a lot in AvP, but I never managed to loop the Pussycats in," said de Campi in a statement.

"So it’s wonderful to have the opportunity to focus on the trio and their friends and frenemies in this mini. I’ve spent a heck of a lot of time around bands — I directed music videos for ten years, and even now I keep trying to leave rock n’ roll but I always get pulled back in: I’ve just worked on comics stories for Slipknot, Megadeth and Amon Amarth. So tackling the dramas of a touring band is very familiar territory... except this time, the girls don’t get a crappy van or a posh tourbus, they get a spaceship."

Here's the official synopsis: "Josie and the Pussycats are the hottest band in outer space! But with fame and fortune comes turmoil as internal conflicts are threatening to tear the group apart.

"But that's nothing compared to the alien horrors they’re about to encounter as they find themselves adrift in the vastness of space! Even if the Pussycats manage to stick together as a band, will they be able to survive the horrors that await them in the final frontier?"