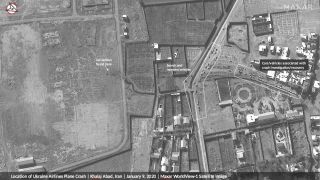 This annotated image, captured by Maxar Technologies’ WorldView-1 satellite on Jan. 9, 2020, shows debris from the Ukrainian airliner that crashed in Iran a day earlier, killing all 176 people aboard.
(Image: © Maxar Technologies)

Sharp-eyed satellites have spotted debris from the Ukrainian airliner that went down in Iran early Wednesday morning (Jan. 8).

The photos were snapped yesterday (Jan. 9) by the WorldView-1 and WorldView-2 satellites, which are operated by DigitalGlobe, a subsidiary of Colorado-based Maxar Technologies.

Both of these spacecraft can capture imagery with a resolution of about 18 inches (50 centimeters), though they fly at different altitudes. WorldView-1, which launched in 2007, circles Earth about 310 miles (500 kilometers) up; WorldView-2, which was lofted in 2009, orbits 480 miles (770 km) above our heads.

Officials in the United States and allied countries have said that it appears Iran shot down the plane, perhaps mistaking it for an enemy craft in a "fog of war" scenario.

Iranian officials have denied responsibility for the plane crash, claiming that the U.S. is "spreading lies" about the intelligence that pins the blame on the regime, according to CBS News.