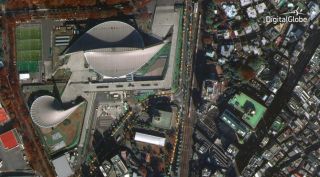 WorldView-4 first picture shows the Yoyogi National Gymnasium in Shibuya, Tokyo, where Japan hosted the 1964 Summer Olympics and plans to host them again in 2020.
(Image: © DigitalGlobe)

The photo, taken Nov. 26 according to statements from DigitalGlobe and camera provider Harris Corp., showcases WorldView-4's imaging capabilities with a picture of the Yoyogi National Gymnasium in Shibuya, Tokyo, site of the 1964 Summer Olympics and future home of the 2020 Summer Olympics.

DigitalGlobe said in an October filing with the U.S. Securities and Exchange Commission that it expects to begin commercial operations and gain incremental revenue from the satellitestarting in 2017.

Built by Lockheed Martin, WorldView-4 orbits the Earth every 90 minutes, documenting up to 680,000 square kilometers per day of the planet's surface. Combined with WorldView-3, which launched in August 2014, the new satellite more than doubles DigitalGlobe's ability to collect 30-centimeter imagery.

Wildfires at Vandenberg Air Force Base in California delayed the Atlas V launch of WorldView-4 by nearly two months to Nov. 11. The satellite brings the size of DigitalGlobe's constellation of imaging satellites to five.

Working with Taqnia Space and the King Abdulaziz City for Science and Technology of Saudi Arabia, the company is creating a constellation of at least six small satellites for sub-meter resolution imaging through a joint venture. Expected to launch in early 2019, the small satellites will leverage DigitalGlobe's ground infrastructure and distribution while its Saudi partners handle construction, integration and launch.