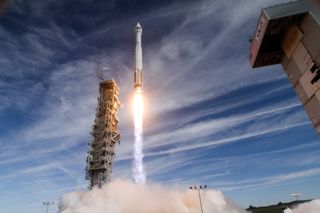 A super-powerful Earth-observing spacecraft has finally taken to the skies, nearly two months after a wildfire nixed its first launch attempt.

In addition, seven tiny cubesats were onboard in a "ridesharing" initiative. All of the cubesats manifested for the WorldView-4 mission are sponsored by the National Reconnaissance Office, the agency in charge of the United States' spy satellites, and are unclassified technology-demonstration programs. [Launch Photos: WorldView-4 Satellite Soars Into Space on Atlas V]

The Atlas-V that lofted WorldView-4 today had been scheduled to launch NASA's InSight Mars lander earlier this year, before issues with one of InSight's instruments delayed the Red Planet probe's liftoff until 2018.

Today's liftoff was originally scheduled for Sept. 18, but that attempt was called off due a wildfire raging in a canyon south of the launch pad. While the fire didn't affect the pad, it did damage communications gear and other infrastructure at Vandenberg, leading to the lengthy delay.

WorldView-4 is a multispectral, high-resolution commercial imaging satellite owned and operated by DigitalGlobe of Westminster, Colorado, and built by the aerospace company Lockheed Martin. Its mission is to provide high-resolution color imagery to commercial, government and international customers.

In a prelaunch news briefing on Sept. 15, Harris Corp.'s Rob Mitrevski, vice president and general manager for the firm's intelligence, surveillance, and reconnaissance business, said the surface figure of SpaceView 110's 3.6-foot-wide (1.1 m) primary mirror is manufactured to an accuracy of 1/1,000th of a human hair.

Mitrevski said if the smoothness of the primary mirror is off by even the width of a human hair, "the image captured by the system would be a complete blur."

This means that the sensor is capable of capturing data points that are just over 1 foot (30 cm) apart, Mitrevski said. "What a great capability that is," he said.

From orbit, for example, WorldView-4 images can identify the make of a car.

Lockheed Martin's Carl Marchetto, vice president and general manager of commercial space, emphasized what can be discerned from WorldView-4 pictures.

"It's all about what's changing on the Earth, and how does this picture compare with the pictures that WorldView-3 took?" he said.

DigitalGlobe's Taner Kodanaz said that WorldView-4 can be an important tool in monitoring the changing planet "and the challenging situations that all of us face." He underscored the increasing usefulness of high-resolution satellite imagery, from monitoring Ebola outbreaks to pinpointing perpetrators of modern-day slavery.

Kodanaz told Space.com that high-resolution satellite imagery is "sparking new ideas from many individuals," such as detecting what the eye can't see on the ground — for example, never-before-observed ancient cities.

"This launch ensures DigitalGlobe's customers they will have access to the highest-quality and most map-accurate imagery available on the market today," Mark Brender, a board member of the DigitalGlobe Foundation, told Space.com.

"Satellite imagery from WorldView-4 will provide customers visual truth serum of what's happening on the ground anywhere on the planet for the next dozen years or more," Brender said.