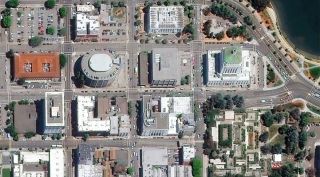 WASHINGTON – DigitalGlobe released an hours-old photo of Oakland, California on July 19, hoping to squash questions about the operability of one of its high-resolution imagery satellites after the U.S. Air Force said it had been part of a debris-causing event earlier in the day.

The Joint Space Operations Center, which is the Defense Department's nerve center for space operations and tracks space objects from Vandenberg Air Force Base in California, tweeted July 19 that it had identified a debris-causing event related DigitalGlobe's WorldView-2 satellite.

As a result, the JSpOC is tracking eight pieces of debris related to the incident. An estimated time of the event was not immediately available.

As if to underscore the satellite's health, the company tweeted an image of downtown Oakland, California from the satellite taken later that afternoon.

WorldView-2, which launched in October 2009, provides 46-centimeter resolution imagery to commercial and government customers, including the National Geospatial-Intelligence Agency, which distributes and analyzes satellite imagery for both the military and intelligence community.

The U.S. government accounts for about 50 percent of WorldView-2 capacity. Ball Aerospace built the satellite.