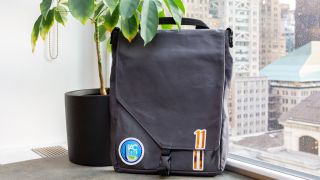 With the International Astronautical Congress come to an end, its souvenir bag is headed around the world.
(Image: © Space.com)

WASHINGTON — You know those tote bags that you get every time you travel to a conference? The bags that fall apart by the time the event is finished, meeting their ultimate destiny in the trash can?

That's what Aerothreads wanted to avoid when the Maryland-based "soft goods" space startup was asked to create swag bags for the International Astronautical Congress (IAC) held here. The bags would include a tribute to the 50th anniversary of the first moon landing, in 1969. And instead of trashing the bags, delegates are so happy with them that they are festooning the carriers with patches of their own.

Aerothreads usually makes multilayer insulation for aerospace and industrial applications, and the 10-person group brought the same care to this bag design. "We put it out to our team, and they came out with 25 designs. What you see here is down-selected, [chosen from those designs]," Aleksandra Bogunovic, the principal thermal blanket specialist at Aerothreads, told Space.com.

The tote, unfortunately, is "not vacuum-compatible," according to the specs. But otherwise, it has all the geeky references a space nerd could want. First of all, there is the conference comfort: an adjustable strap to fit all body types, an internal pocket, and a little metal fastener for attaching a decorative item or water bottle. And then there's the design, a true tribute to space exploration.

At the front bottom of the bag is the number 11, an obvious tribute to the Apollo 11 mission. What's more, when you open up the bag, the 11 turns into rocket trails beneath the silhouette of the Saturn V rocket that brought astronauts to the moon. The 11 and rocket trails both consist of polyimide film, the same material used on the Apollo 11 Eagle lunar module that landed on the moon. Polyimide is still used in satellites and spacecraft today.

The IAC logo is rendered as a patch on the opposite side of the bag, because what mission doesn't have a patch? And if you open up the bag and look at the top of the pocket, you'll see a crescent moon made of polyester film. This material is commonly used in multilayer insulation that keeps spacecraft components safe from the cold of space.

"The moon in the top is a destination, and it is a hidden surprise, and you don't expect it when you open the bag," Casey Kelby, a thermal engineer and a business developer at Aerothreads, told Space.com.

The gray color of the bag is even called "moon-mist gray," which is perfect as an Apollo tribute. And the font used inside the bag is the same as that used on the six plaques that NASA astronauts left on the moon in the six moon landings.

Kelby said the conference reaction has been immense. She's heard of people planning to give the bags as gifts, people who plan to put space-themed Lego sets inside and give the bags to their children, and even couples fighting in hotel rooms over who gets to use the bag at the conference that day. "We really saw an opportunity to make something special and commemorative," Kelby said.