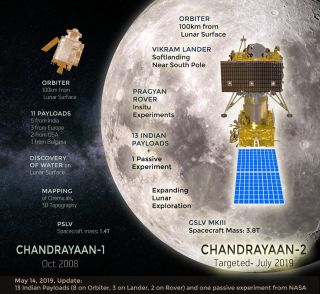 India is gearing up for the July launch of Chandrayaan-2, a robotic lunar orbiter/lander/rover combo that is scheduled to touch down at a predetermined site close to the lunar south pole.

According to a statement from the Department of Space of the Indian Space Research Organization (ISRO), the country's moonshot will fly atop a Geosynchronous Satellite Launch Vehicle (GSLV) MkIII booster during the window of July 9-16, with an expected moon landing on Sept.6, 2019.

Chandrayaan-2 will be an advanced version of the previous Chandrayaan-1 mission to the moon that launched successfully on Oct. 22, 2008, from the Satish Dhawan Space Centre.

The orbiter and lander will be interfaced mechanically and stacked together as an integrated module and accommodated inside the GSLV MK-III launch vehicle. The Pragyan rover is housed inside the lander.

After launch into Earth orbit by the GSLV MK-III, the integrated module will reach moon orbit using an orbiter propulsion module. Subsequently, the lander will separate from the orbiter and soft-land at the predetermined site close to the lunar south pole.

Once deployed, the Pragyan rover will carry out scientific experiments on the lunar surface. Instruments are also mounted on the lander and orbiter for performing science tasks.

There are 13 Indian payloads (eight on the orbiter, three on the lander and two on the rover), along with one passive experiment from NASA — a Laser Retro-reflector Array (LRA) for Lunar Landers.

This LRA is the same design as the one carried onboard Israel's Beresheet lander that crashed on the moon last month.

NASA's retro-reflector is a mirrored device that reflects laser light signals to help pinpoint precisely where a lander is. The LRA can also help researchers accurately calculate the moon's distance from Earth.

Leonard David wrote the book "Moon Rush: The New Space Race," which was published this month by National Geographic. A longtime writer for Space.com, David has been reporting on the space industry for more than five decades. Follow us on Twitter @Spacedotcom or Facebook.