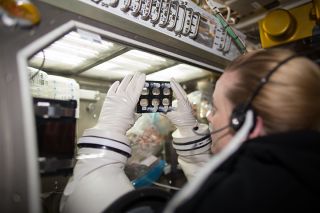 Spaceflight is known to affect the human body in a variety of ways. This includes physiological changes in cardiac function, such as reduced heart rate, lowered arterial pressure and increased cardiac output.

"Our study is novel because it is the first to use human induced pluripotent stem cells to study the effects of spaceflight on human heart function," Joseph C. Wu, senior study author from Stanford University School of Medicine, said in the statement. Wu's team included NASA astronaut Kate Rubins, who did graduate work at Stanford before tending to the cells in orbit.

Specifically, the researchers used human-induced pluripotent stem-cell-derived cardiomyocytes, which were generated by isolating and reprogramming blood cells then sent to the space station aboard a SpaceX cargo capsule, according to the statement. The cells spent 5.5 weeks on the space station, while a control group of cells were studied simultaneously on Earth.

"Microgravity is an environment that is not very well understood, in terms of its overall effect on the human body," Wu said in the statement. "Studies like this could help shed light on how the cells of the body behave in space, especially as the world embarks on more and longer space missions such as going to the moon and Mars."

When the cells from the space station returned to Earth, the cells showed normal structure, but appeared to have altered their beating pattern and calcium-recycling patterns to adapt to the microgravity environment of space, the researchers said.

The team also used RNA sequencing to study gene expression in the cells that had been sent into space. Their findings suggest that 2,635 genes were expressed at different rates during and after spaceflight when compared with the ground-control group, according to the statement.

In addition, the researchers found that gene pathways related to mitochondrial function were expressed more in the group of cells that were sent to the space station. However, 10 days after returning to normal gravity on Earth, relatively normal patterns of gene expression reappeared in the space-flown cells, the researchers said.

"We're surprised about how quickly human heart muscle cells are able to adapt to the environment in which they are placed, including microgravity," Wu said in the statement. "These studies may provide insight into cellular mechanisms that could benefit astronaut health during long-duration spaceflight, or potentially lay the foundation for new insights into improving heart health on Earth."

Their findings were published Nov. 7 in the journal Stem Cell Reports.