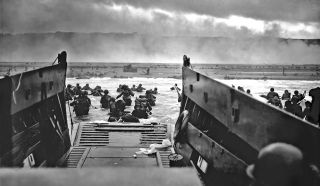 Seventy-five years ago today (June 6), more than 150,000 Allied troops stormed the coast of Normandy to start wresting control of occupied France back from the Nazis.

The success of this bold and dramatic maneuver, known as the D-Day invasion, helped turn the tide of World War II. And astronomy helped make it happen, according to celestial sleuth Donald Olson.

"The commemorations and media coverage will rightly focus on the heroism of the Allied soldiers, sailors and airmen who began the liberation of France," Olson, an astronomer and physics professor at Texas State University, said in a statement. "But we can also take this opportunity to appreciate the role astronomy played in the planning and execution of that world-changing event."

For example, D-Day's planners didn't just pull June 6 out of the air; that date met crucial criteria for the surprise invasion, Olson noted in a new analysis published this week in Sky & Telescope.

It was in the springtime, for starters.

"A spring invasion in May or June was ideal, because that would leave the entire summer for the Allied forces to drive back the German forces before bad weather set in with the coming of fall and winter," Olson said. "Invasion preparations weren't complete by May, so General Dwight D. Eisenhower [commander of the Allied forces in northwest Europe] postponed the assault until June."

In addition, the planners wanted bright moonlight for the Allied paratroopers, who began dropping onto the French coast a little after midnight, and a low but rising tide for the seaborne soldiers, who began hitting the beaches around sunrise.

Low water would expose the Germans' extensive system of submerged coastal defenses, allowing the Allies to attack and potentially disable these dangerous obstacles. And a rising tide would ensure that landing craft didn't get stuck on the beaches for up to 12 hours, Olson said.

And that's where the planners' knowledge of astronomy came in. On that part of the Normandy coast, Eisenhower and his team determined, the desired tide occurred only around the time of a new or full moon. That left the Allies with three invasion-date options, according to Olson: June 5, June 6 or June 7.

The initial target was June 5, but bad weather forced a one-day delay, Olson noted in his Sky & Telescope piece.

The new article also helps set the D-Day astronomical record straight in one regard, he added. Many historical accounts state that the invasion occurred under a "late-rising moon." The planners wanted this, the story goes, because it allowed Allied aircraft to remain cloaked in darkness for as long as possible, until the pilots needed moonlight to pick out drop zones for the paratroopers.

This story contradicts statements by Eisenhower, United Kingdom Prime Minister Winston Churchill and other key architects of the invasion, who stressed the need for bright moonlight throughout, Olson said. And his new research backs the architects.

"It's not a late-rising moon. The moon actually rose before sunset on June 5 and remained in the sky all night long," Olson said in the same statement. "It didn't set until after sunrise. It was reaching the highest point in the sky at 1:19 a.m., near the time of the British Pegasus Bridge assault and just as the American airborne operations began."

(One of D-Day's main goals was the capture of two bridges, which are now known as Pegasus Bridge and Horsa Bridge. British forces managed to capture both in the early stages of the invasion.)

Olson also traced the "late-rising moon" business to its source. The phrase spread widely because Cornelius Ryan used it in his 1959 book about D-Day, "The Longest Day." But Olson found that it apparently originated with Walter Bedell Smith, who served as Eisenhower's chief of staff from 1942 to 1945.

Smith wrote about the desire for a late-rising moon in 1946, in a series of articles about the war that he wrote for the Saturday Evening Post magazine, Olson discovered.