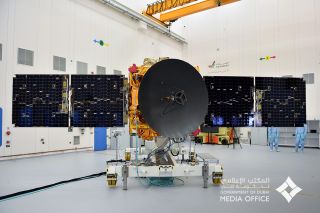 The UAE finished construction on its Hope spacecraft, bound for Mars, earlier this year.
(Image: © Government of Dubai Media Office)

If all goes smoothly this summer, three new spacecraft will launch toward the Red Planet, including the Arab world's first interplanetary probe, dubbed Hope Mars Mission.

Construction on that spacecraft wrapped up earlier this year in the United Arab Emirates in preparation for its July launch. The launch will come less than a year after another major milestone for the country: In September 2019 its first spaceflyer, Hazzaa Ali Almansoori, launched aboard a Russian Soyuz rocket and spent a week living and working on the International Space Station.

"The Hope Probe project carries the hopes and ambitions of the Emirati nation and the aspirations of the Arab and Islamic people for a brighter future," Sheikh Mohammed bin Rashid Al Maktoum, the prime minister of the UAE and ruler of Dubai, said in a statement. "We seek to send a message of peace and hope to the world, and envision a glorious future in which knowledge and scientific expertise are freely shared between nations."

The Hope spacecraft, like Chinese and U.S. Mars-bound missions launching this summer, is scheduled to take advantage of the window when Earth and Mars are helpfully aligned. The schedule should ensure that Hope, which is also known as the Emirates Mars Mission, takes about eight months to reach the Red Planet.