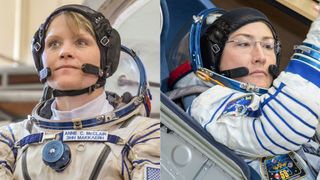 Two U.S. astronauts will make the first all-female spacewalk in history on March 29, if all goes to plan — a fitting end to Women's History Month.

Anne McClain, who arrived at the International Space Station Dec. 3, will float into space with U.S. crewmate Christina Koch to work on "upgrades on the outside" of the station, McClain said in a televised conversation with U.S. Vice President Mike Pence on Wednesday (March 6).

McClain said that she and Canadian astronaut David Saint-Jacques have been preparing for the spacewalks for a few weeks while awaiting the arrival of Koch, U.S. astronaut Nick Hague and Russian cosmonaut Alexey Ovchinin. The Expedition 59 trio are set to launch on "Pi Day" (March 14) at, believe it or not, 3:14 p.m. EDT (7:14 p.m. GMT).

"[We're] getting the suits ready and getting the systems ready, setting the procedures, and getting the team ready," McClain said. "As you know, the other half of our team will not arrive until about a week before the spacewalks, so [there are] a lot of technical preparations [to do] to make sure everything is ready. But the space station, it's been up here for 20 years, and it's time to do some upgrades on the outside, and we are ready."

The spacewalk milestone wasn't in the original mission plan, although a NASA spokesperson expressed her happiness that it worked out that way.

"It really is the luck of the draw," NASA's Stephanie Schierholz told Space.com from the agency's headquarters in Washington, D.C.

The spacewalks to replace batteries on the space station's solar arrays were originally scheduled for a different crew in fall 2018, Schierholz said. However, they were postponed until the station returns to its full six-person crew complement in mid-March, after the harrowing launch abort in October of the Soyuz spacecraft carrying Hague and Ovchinin.

"We feel lucky that it [the all-female spacewalk] just sort of happened to be in Women's History Month," Schierholz said.

And there are more milestones for women in space than just the two spacewalkers. At Mission Control, lead flight director Mary Lawrence will oversee the station crew and Jackie Kagey will serve as the lead spacewalk officer, Schierholz said.

When Koch arrives at the station, it will be only the fourth time two women have served together on an expedition crew to the station, Schierholz said (not counting visiting shuttle crews). The space station has played host to many milestones for women over two decades, including hosting the most women in space at once (four, in April 2010), the longest single spaceflight by a woman (289 days, by Peggy Whitson during 2016-17) and the most cumulative time in space by a woman (Peggy Whitson, who spent most of her 665 days in space on the space station).

The all-female spacewalk is part of a trio of planned extravehicular activities in March and April. On March 22, McClain and Hague will don their spacesuits and head outside, while on April 8, Hague and Saint-Jacques will take a turn. The four participating astronauts are all rookie spaceflyers and spacewalkers but have practiced procedures for many hours on the ground. All dates are subject to change.