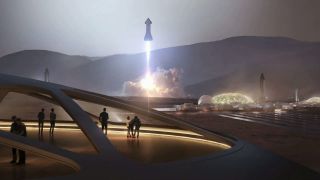 SpaceX's billionaire founder and CEO outlined some ambitious goals for the company's Starship Mars-colonization system during a flurry of Twitter posts on Thursday (Jan. 16).

The Starship architecture consists of a big spaceship called Starship, which Musk has said will be capable of carrying up to 100 people, and a giant rocket named Super Heavy. Both of these vehicles will be reusable; indeed, rapid and frequent reuse is key to Musk's overall vision, which involves cutting the cost of spaceflight enough to make Mars colonization and other bold exploration feats economically feasible.

And "frequent reuse" is a bit of an understatement, it would seem. In one of Thursday's tweets, for example, Musk wrote that the eventual goal is to launch each Starship vehicle three times per day on average. Each Starship will be able to carry about 100 tons of payload to orbit, so, at that flight rate, every vehicle would loft about 100,000 tons annually, he explained.

And there won't be just one Starship — far from it, if everything goes according to Musk's plan.

"Building 100 Starships/year gets to 1000 in 10 years or 100 megatons/year or maybe around 100k people per Earth-Mars orbital sync," Musk wrote in another Thursday tweet.

"Orbital sync" refers to an alignment of the two planets that's favorable for interplanetary travel, which comes along just once every 26 months. So, Musk envisions huge fleets of Starships departing during these windows.

"Loading the Mars fleet into Earth orbit, then 1000 ships depart over ~30 days every 26 months. Battlestar Galactica …" he wrote in another tweet. (And Musk wants each Starship to keep flying for a while. In yet another tweet, he said SpaceX is aiming for an operational life of 20 to 30 years for each vehicle.)

Musk wants all of this activity to lead to the establishment of a sustainable settlement on the Red Planet. This goal — making humanity a multiplanet species — is close to the entrepreneur's heart. He has repeatedly stressed that it's why he founded SpaceX back in 2002, and why he has been amassing wealth for the past few decades.

Back in mid-2017, Musk said that the Starship architecture (which was then called the Interplanetary Transport System) could potentially allow a million-person city to rise on Mars within 50 to 100 years. He's still working toward such an ambitious timeline — an even more ambitious one, in fact. On Thursday, one of Musk's Twitter followers asked, "So a million people [on Mars] by 2050?" The billionaire responded simply: "Yes."

Super Heavy won't make the trip to Mars, by the way; the huge rocket is needed just to get the Starship vehicle off Earth. The passenger spacecraft will be able to launch itself off the moon and Mars, both of which are much smaller than our planet and are therefore much easier to escape.

Starship could get up and running soon. SpaceX representatives have said the first operational missions of the vehicle, which will likely loft communications satellites, could come as early as 2021. And there's already one crewed mission on Starship's manifest — a round-the-moon voyage booked by Japanese billionaire Yusaku Maezawa, which is targeted for 2023.