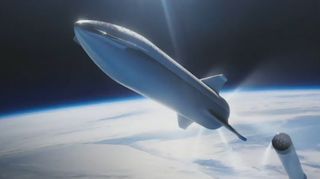 Update: SpaceX has delayed the start time of tonight's briefing by one hour. It will now begin at 9 p.m. EDT (0100 GMT).

It's that time again.

Elon Musk will unveil the latest design of SpaceX's Starship Mars-colonization architecture tonight (Sept. 28) during a presentation at the company's South Texas facilities, near the village of Boca Chica.

The talk, which will occur at 8 p.m. EDT (7 p.m. CDT, 0000 GMT), will be streamed live online. You can watch it live here at start time, as well as on Space.com's homepage. You can watch the livestream directly from SpaceX here.

The billionaire entrepreneur has given such an update every September since 2016. Much has changed since then, including the architecture's name, which shifted from the Interplanetary Transport System to the BFR to the current moniker, Starship and Super Heavy.

The basic design concept has held firm, however: a two-stage system that consists of a passenger-carrying vehicle (Starship in the latest iteration) stacked atop a huge rocket (Super Heavy). Both elements will be fully and rapidly reusable, Musk has said.

Starship and Super Heavy will both be powered by SpaceX's next-generation Raptor engine. The stainless-steel, 100-passenger ship will have six Raptors, whereas the first-stage rocket will boast 35 of the engines.

Or so we think now; we'll have to wait until tomorrow evening to hear if those numbers have changed.

Musk will have a nice visual aid at hand during the presentation: the newly assembled Starship Mk1, a three-engine prototype that SpaceX plans to fly for the first time in October. The Mk1, which stands 165 feet (50 m) tall, will first aim for an altitude of 12 miles (20 kilometers) and eventually conduct orbital test flights, Musk has said.

SpaceX is also building a similar vehicle, Starship Mk2, at the company's Florida facilities. The competition between the two construction efforts should end up improving the final Starship design, Musk has said.

The final Starship could take to the skies very soon, if the testing campaign continues to go well. (SpaceX has already retired its first prototype, the stubby, one-engine Starhopper vehicle.) The Starship-Super Heavy duo may start launching communication satellites as early as 2021, SpaceX representatives have said.

And Japanese billionaire Yusaku Maezawa has booked a crewed flight around the moon aboard the system, with a target launch date of 2023.

Editor's note: This story was updated to include SpaceX's webcast information for Elon Musk's Starship update.