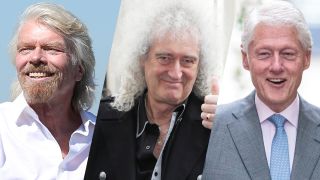 Richard Branson, Brian May and Bill Clinton are a few of the celebrities who are reportedly attending the total solar eclipse in Chile on July 2, 2019.
(Image: © Phillip Faraone/Getty; Neil Mockford/GC Images; Jack Taylor/Getty)

LA SERENA, CHILE — Among the thousands of "eclipse chasers" heading to Chile and Argentina to witness the Great South American Eclipse on July 2 are several celebrities, who are also making their way to the Atacama Desert to watch the moon cross in front of the sun.

According to The Times of Chile, the cohort of celebrities who traveled here to watch the total solar eclipse includes astrophysicist and guitarist Brian May of the band Queen, Microsoft's billionaire founder Bill Gates, former U.S. president Bill Clinton and Virgin Galactic founder Richard Branson.

The three men will spend their eclipse "glamping," or camping glamorously, with about 230 other affluent visitors who spent upwards of $5,000 on tickets for an elite accommodation service known as the Nomad Eclipse Glamp, according to the local news outlet Ahora Noticias. That camp is located just northeast of La Serena, the first city in South America that will see totality.

Robert Downey Jr., who stars in the "Iron Man" movies, and "Captain America" actor Chris Evans are also rumored to be in the area for the eclipse, but their presence here has not yet been confirmed.

Rihanna fans had a field day with the rumor that the singer and actress was in La Serena to see the total solar eclipse — so much so that her alleged attendance became a trending topic on Twitter over the weekend. However, that rumor was dispelled today (July 1) when the Chilean news outlet Concierto reported that Rihanna is, in fact, nowhere near the continent of South America. She is actually in England watching the International Cricket Council World cup. (Sorry, Rhianna fans!)