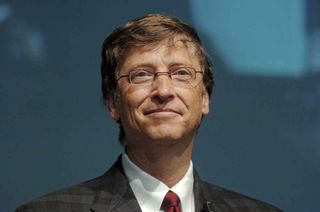 Bill Gates, along with a few of his billionaire friends, has launched a US$1 billion fund to support research into energy technologies that will help us address climate change.

The idea behind Breakthrough Energy Ventures is to provide funding for basic energy research, which may otherwise get left behind if the incoming US president Donald Trump decides to cut federal support for such programmes. The fund will target 55 activities across five general categories including electricity, transport, agriculture, manufacturing and buildings.

It's a nice idea, but unfortunately, most of these activities will only provide incremental improvements in reducing global carbon emissions. On its own, this fund is incapable of making any significant progress on climate change.

But while watching one of the episodes of National Geographic’s series, Mars, one night, I had an epiphany. It dawned on me that everything we need to do overcome the challenges associated with creating a human colony on Mars by 2035 could also form the singular focus of Breakthrough Energy Ventures.

So I want to send Bill Gates or, at least, his thinking about energy technology, to Mars.

To sustain even today's global human population of 7.4 billion people, not including the projected 2 billion who will join us between now and 2050, will require wholesale upgrades to our existing energy, water, food, and transport systems.

The improvements in these systems required to deliver sufficient goods and services to approximately 8.4 billion people in 2035 are of the same order of magnitude needed to support a much smaller colony on Mars by the same year. These improvements would equate to efficiency and productivity upgrades of between ten and 1,000 times better than anything that exists at the commercial scale today.

Most of the enormous investments we are currently making in energy, water, food and transport systems only lead to incremental improvements that will not allow us to achieve Mars-levels of efficiency and productivity on any meaningful timescale.

This is because most of the world's investment money chases risk-adjusted returns on a short-term basis. This leads to a disproportionate amount of investment into, for example, improvements in the fuel efficiency of internal combustion vehicles.

While this generates sufficient returns for institutional investors, including pension funds, these efficiency and productivity improvements are nowhere near the levels we will need to meet our exponentially increasing targets on Earth, nor the levels required to support human life on Mars.

An example of the type of thinking that leads to Mars-level improvements is the Hyperloop Alpha proposal originally put forward by Elon Musk – who, incidentally, also wants to colonise Mars – and now being developed by two business groups.

In 2013, Musk made the observation that investing in a high-speed train line between Los Angeles and San Francisco would be a tremendous waste of time, capital and resources as it would be obsolete by the time it was operational in ten to 20 years. He pointed out that, given the level of investment, time and resources required to build a high-speed rail system, designers should instead shift their brief towards enormous improvements in speed, safety and cost.

This led him to propose a vacuum tube propulsion transport system that would take people from Los Angeles to San Francisco in 35 minutes and at lower cost than making the same journey today. This is Mars-level thinking in action and the type of infrastructure project that serves as the foundation for a more prosperous future.

It is no mystery what Mars-level improvements to our energy, food, water and transport systems need to look like by 2035.

In the stationary energy sector, we need to move from centralised fossil fuel plants to distributed renewable energy with storage so we can make and use clean energy close to where it is needed.

Transport in large urban centres needs to shift to electricity with batteries in cars, homes, schools and office buildings.

Food that converts high-value plant inputs into lower value animal proteins should be phased out quickly. This means a rapid shift away from cows, which consume huge amounts of plant matter and water and generate very limited outputs.

At levels equal to what we will need on Mars, key materials including copper, iron, and phosphorus need to be fully recycled and, equally important, deployed into high-value products and services. The market allows too many of these high-value materials to be used for frivolous purposes, for example on video game consoles, and ultimately wasted.

Products need to be redesigned so that manufacturers can reclaim them at the end of their useful life and the key materials can be upcycled into even higher value products.

So the bad news is that all our key support systems now operate at levels of efficiency and productivity well below what is required to support even today's human population – much less the two to three billion additional people on the way in the next few decades.

The good news is that the opportunity to develop new technologies, business models, and integrated systems is the largest in history.

In 1961, US president John F Kennedy inspired us to go to the Moon – Mr Gates, it's time to forget about moonshots and start looking at Mars as the next giant leap for mankind.