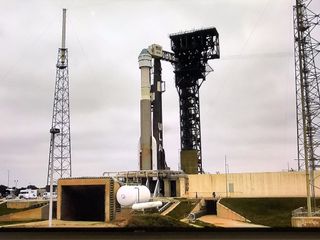 Boeing's Starliner astronaut taxi is on the launch pad.

"Atlas and MLP are hard down at the pad. Successful roll #OFT is very, very, very near," ULA president and CEO Tory Bruno tweeted this morning.

Boeing has been developing Starliner under a multibillion-dollar NASA commercial crew contract. SpaceX got a similar deal for work on its Crew Dragon capsule. The space agency wants these two private vehicles to fill the astronaut-ferrying shoes of the space shuttle fleet, which retired in July 2011. Ever since then, Russian Soyuz spacecraft have been the only means of crew transport to and from the ISS.

The eight-day OFT mission is a crucial step toward bringing Starliner fully online, proving out the capsule's capabilities during a trip to and from the ISS. If OFT is a success, a crewed demonstration mission to the orbiting lab will follow, likely sometime next year.

SpaceX conducted its version of the OFT, an uncrewed ISS mission called Demo-1, this past March. The California-based company is gearing up for an in-flight test of Crew Dragon's emergency-escape system in January, which will clear the way for a crewed demonstration flight to the ISS for the SpaceX capsule.

Starliner and the Atlas V are scheduled to lift off Friday at 6:36 a.m. EST (1136 GMT). There's just a 20% chance of a weather-related delay, Air Force officials have said.