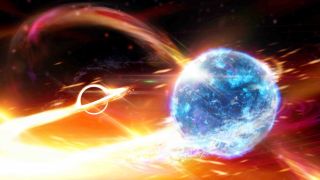 Scientists may have observed something that has never been seen before: a black hole swallowing a neutron star.

About 900 million years ago, a catastrophic cosmic event sparked a ripple in space-time that passed through Earth last week (Aug. 14). Scientists observed the event at both the advanced LIGO (Laser Interferometer Gravitational-Wave Observatory) and Virgo, LIGO's Italian counterpart. After further investigation and initial speculations, scientists think that this ripple could have been caused by the merger of a black hole and a neutron star.

Currently, scientists can only confirm that the signal detected by LIGO and Virgo is a gravitational-wave candidate, LIGO team member Christopher Berry, a physicist at Northwestern University, told Space.com. But, while Berry is hesitant to label the binary, known as S190814bv, because scientists have yet to confirm what objects may have merged and their exact sizes, "from our initial estimates, it looks like this could potentially be a neutron star-black hole binary," he said.

Related:  With Gravitational-Wave Detectors, Cosmic Mysteries Will Be Solved

On Sept. 14, 2015, about a hundred years after Albert Einstein predicted their existence, LIGO made the first detection of gravitational waves. Now, just a few short years later, scientists detect gravitational waves with regularity, Berry said. But, while this growth in gravitational-wave astronomy is an incredible achievement, it is still very difficult and time-consuming for researchers to determine what binary merger causes the "chirp" signal that LIGO and Virgo detect.

Scientists currently consider that objects in these systems that are up to three times the mass of our sun to be neutron stars, and objects that are at least five times the mass of our sun to be black holes. However, while scientists have not yet observed a black hole below five solar masses or a neutron star above about two and a half solar masses, they do not know what the minimum mass of a black hole might be, or what the maximum mass of a neutron star might be.

There are a few possibilities regarding what LIGO and Virgo could have detected.

The objects could be a neutron star binary; that is, the fiery merger between two neutron stars, which are the collapsed cores of massive stars. It could also be a black hole binary. If it ends up being a black hole binary, that means that one of the black holes in the system will be less than three solar masses, and it will be the smallest black hole ever observed by far.

So, while it would be exciting for scientists to confirm that this is a merger between a black hole and a neutron star because it's something no one has ever seen before, any of these possible outcomes would mark a step forward in scientific exploration. By studying these systems, "we can learn a lot about the physics that goes into forming neutron stars and black holes, so it's another step towards completing our understanding of how these binary systems evolve and form," Berry said.

"The ANU SkyMapper Telescope responded to the detection alert and scanned the entire likely region of space where the event occurred," Susan Scott, a professor at the Australian National University Research School of Physics, said in a statement about efforts to confirm which objects may have merged. As of right now, "we've not found any visual confirmation.