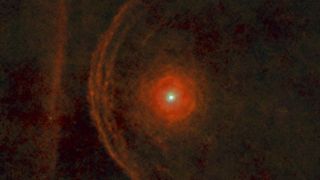 A bright, red star that started dimming dramatically in 2019 isn't about to explode, as some scientists initially thought — it's just really dusty, a new study shows.

Last year, the star, called Betelgeuse, began dimming significantly, and quickly. The brightness of the red supergiant star, which typically glows in the constellation Orion, varies over time. But this fading was so intense that astronomers quickly took notice and began observing the star intensely, trying to figure out what was going on.

Some scientists have suggested that, because Betelgeuse was within about a million years of its expected 9-million-year lifetime, the star might have been dimming in preparation of going supernova — in other words, exploding at the end of its life. However, in a new paper, astronomers provide evidence to support the idea that Betelgeuse isn't about to explode. Instead, they say, it's dim because it's clouded by dust.

Video: Will the Giant Star Betelgeuse Explode?
Related: The Brightest Stars in the Sky: A Starry Countdown

In the new paper, the researchers worked to determine the surface temperature of the star to see if cooling temperatures could be the cause of the dimming. If the surface was significantly cooler than previous data showed, it could mean that giant convection cells brought hot gas out from the sun's interior and that the gas cooled before falling back into the star.

So, by ruling out cooling as an explanation for the dimming, they looked to dust. "A comparison with our 2004 spectrum showed immediately that the temperature hadn't changed significantly," Philip Massey, an astronomer at Lowell Observatory who co-authored the paper alongside Emily Levesque, an astronomy professor at the University of Washington, said in the statement. "We knew the answer had to be dust."

It's likely that Betelgeuse "sloughed off some material from its outer layers," the researchers said in the statement. This is not an uncommon "behavior" for red supergiants like Betelgeuse and would explain the dimming astronomers have observed, the team said.

"We see this all the time in red supergiants, and it's a normal part of their life cycle," Levesque said in the statement. "Red supergiants will occasionally shed material from their surfaces, which will condense around the star as dust. As it cools and dissipates, the dust grains will absorb some of the light heading toward us and block our view."

Though Betelgeuse might just be dusty now, it will explode eventually. Astronomers expect Betelgeuse's core to collapse, and for the star to go supernova, within the next 100,000 years.

And although Betelgeuse won't explode until well after our lifetimes, the star is still interesting to observe and study, Levesque said.

"Red supergiants are very dynamic stars," she said in the statement. "The more we can learn about their normal behavior — temperature fluctuations, dust, convection cells — the better we can understand them and recognize when something truly unique, like a supernova, might happen."

This paper was accepted to the journal Astrophysical Journal Letters and was published Feb. 24 on the preprint site arXiv,