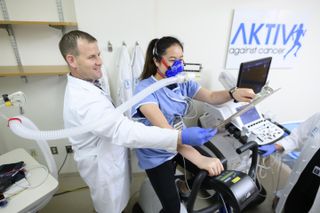 The workout routine astronauts use to prepare for space may also benefit cancer patients by reducing the long-term side effects of medical care.

Astronauts undergo training before, during and after they go to space. This includes medical tests and physical training to assess spaceflyers' cardiorespiratory fitness and to prevent bone and muscle loss.

Researchers from Memorial Sloan Kettering Cancer Center in New York City looked at similarities between astronauts during spaceflight and cancer patients during treatment. The scientists' findings suggest that astronauts in space experience physical stress similar to that of cancer patients who are undergoing treatments such as chemotherapy, immunotherapy and targeted therapy.

Related: This Is How NASA's Trying to Find Better Cancer Treatments in Space (Video)

"Both have a decrease in muscle mass, and they have bone demineralization and changes in heart function," Jessica Scott, senior author of the study and an exercise physiology researcher at the Memorial Sloan Kettering Cancer Center's Exercise Oncology Service, said in a statement.

In addition, "astronauts may get something called space fog, where they have trouble focusing or get a little forgetful," Scott said. "That's very similar to what some cancer patients experience, which is called chemo brain."

Unlike astronauts, who endure rigorous training, cancer patients are often advised to rest in preparation for treatment and during recovery. Instead, the researchers suggested that basic exercises such as walking on a treadmill during and after receiving cancer treatment could help counteract the stress a patient's body undergoes and reduce long-term side effects, such as heart problems.

For the study, patients were provided in-home treadmills and video-call software so that they could exercise from the comfort of their homes. The patients were asked to follow the same astronaut training routine of exercising before, during and after a mission (in their case, treatment) in order to determine if exercise can offset the long-term side effects of medical care.

"Many patients aren't dying from their cancer, but they're now at risk of dying from these side effects," Scott said in the statement. "Using NASA's exercise plan could help with this."

"We really need to do a lot more research and a lot more work," Scott said in the statement. "It's very promising that this NASA exercise framework could be applied to help the approximately 1 million individuals that will be diagnosed with cancer in the United States this year, as well as the over 15 million cancer survivors in the United States today."

The researchers' findings were published Nov. 14 in the journal Cell.