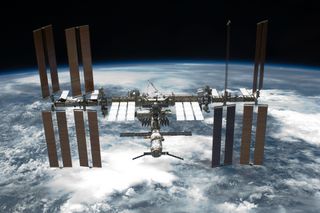 The International Space Station, which has been continuously occupied by rotating astronaut crews since November 2000.
(Image: © NASA)

Lengthy space missions such as a journey to Mars may take a serious toll on astronauts' immune systems, a recent study suggests.

"When we look at the function of the astronaut samples during flight compared to their own samples before they flew, it goes down. When we compare them to controls who stayed on Earth, it still goes down," study lead author Richard Simpson, an associate professor of nutritional sciences at the University of Arizona, said in a statement. "I don't think there's any doubt that NK-cell function is decreasing in the spaceflight environment when analyzed in a cell culture system." [The Human Body in Space: 6 Weird Facts]

This could be a concern for astronauts and mission planners, given NK cells' role in the immune system.

"Cancer is a big risk to astronauts during very prolonged spaceflight missions because of the exposure to radiation," Simpson said.

NK cells "are also very important to kill off virally infected cells," he added. "When you're in the space station, it's a very sterile environment — you're not likely to pick up the flu or a rhinovirus or some community-type infection — but the infections that are a problem are the viruses that are already in your body. These are mostly viruses that cause things like shingles, mononucleosis or cold sores; they stay in your body for the rest of your life, and they do reactivate when you're stressed."

And stress may be a big player in the effect Simpson and his colleagues observed: Rookie spaceflyers suffered a greater drop in NK-cell functionality than veterans did, the team found.

Nailing down exactly what's going on is an important next step, so that researchers can try to mitigate the deleterious effect, study team members said.

The recent findings, which were published last November in the Journal of Applied Physiology, add to the lengthy list of spaceflight-related health effects. For example, long-duration spaceflight can cause vision problems, and it's known to decrease bone density and cause muscle atrophy (which is why rigorous exercise is a staple of every space station crewmember's day).