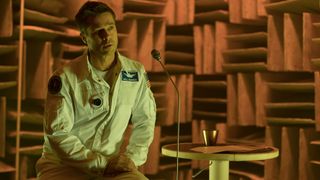 In "Ad Astra," Brad Pitt comes face-to-face with the psychological stress of both space travel and dealing with his relationship with his father.
(Image: © Twentieth Century Fox)

Space can be isolating. Today, astronauts spend months aboard the International Space Station, where they're away from family, friends and the familiar comforts of life on Earth. Future astronauts may spend years away from their life on Earth.

Life in space is physically difficult, there are challenging repercussions to being in zero g and exposed to increased radiation for so long, and scientific studies continue to explore exactly how space affects the human body. But scientists also continue to study how current spaceflight and future, longer duration missions to Mars or farther out into the solar system, could affect the human psyche.

In "Ad Astra," "there are scenes where he's [McBride] basically just waiting. Brad Pitt's on the ship, and he's on a long voyage and he's kind of got nothing to do and it gets to him," Garrett Reisman, a former NASA shuttle astronaut who assisted with technical advising for the film, told Space.com. In these scenes where McBride is alone on a spacecraft, traveling from Mars to Neptune, he seems to start losing touch with himself and reality.

His eyes start to shift from the laser-focused clarity of a military astronaut to a glazed-over gaze. While his struggles with mental health are heavily implied, they are quite apparent in Pitt's performance. In the film, Pitt demonstrates the use of a psychological evaluation technology that seems to be standard for people in his position.

At different points in the film, McBride slaps a small, sticky device onto the side of his neck and speaks to an automated voice that asks him to talk about how he feels. These brief psych evaluations show how his steely demeanor changes and breaks down over the film, devolving with his overall mental well-being.

"One of the key aspects to keeping a crew psychologically healthy for long periods of isolation and expeditionary voyages is to keep them busy," Reisman said. "It's important to keep them busy with meaningful work."

"This is something I've talked to Elon Musk about, for example," Reisman added. "I asked him, 'What are they going to do?'" he said, inquiring about what astronauts on a long-haul voyage to Mars will do with their time outside of work.

"You don't want to just have entertainment. That doesn't really work, especially for "type-A" type personalities like astronauts, he added. You might think that all of that free time in space might be fun, astronauts could spend time playing games or watching movies, but Reisman emphasized that the meaningful part of their daily activities is what's most critical to maintaining mental well-being.

"Either keeping them busy with kind of dull work that's not really important, or just keeping them entertained by giving them video games or movies to watch — neither of those two things will really work," he said.

Phyllis Johnson, a sociologist and researcher at the University of British Columbia who is the principal investigator for the Culture, Values, and Environmental Adaptation in Space (At Home in Space) investigation, agreed that it was extremely important for astronauts to keep busy with tasks that are "psychologically rewarding," she told Space.com.

Johnson said that for current and future investigations, it is important for astronauts to have something that engages them and that they enjoy doing. She added that it would be important for crew members to have tasks that they have to accomplish as a team, as "teamwork, team training will be important in the future."

Johnson referenced how astronauts aboard the International Space Station celebrate holidays to keep them connected with life on Earth. This practice helps to maintain crew morale and she suggested that, perhaps, on longer duration missions, astronauts might find mental comfort in new holidays that bind the crew together, such as celebrating the anniversaries of their time in space.

Though, while Johnson spoke about how teamwork and meaningful work will be critical to crew morale and in maintaining mental health, astronaut selection will play a huge part in the psychological well-being of future astronaut crews.

"In the selection, they would be very careful about whom they select so that they have people that are more self-starters, ones that could deal with more loneliness and more doing things on their own if they needed to," Johnson said. While training, preparation and careful management of how astronauts work together and spend their time are all critical, certain people may be naturally better equipped for deep space travel.