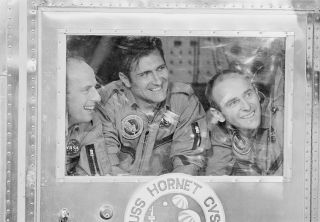 NASA's second human crew to walk on the moon wrapped up their historic mission 50 years ago today (Nov. 24).

The three-person Apollo 12 crew splashed down in the Pacific Ocean on Nov. 24, 1969, four months to the day after their Apollo 11 counterparts did the same. But Apollo 12 did more than enough to escape its famous predecessor's shadow.

For example, Apollo 12 demonstrated a pioneering pinpoint-landing capability. Whereas Apollo 11 overshot its intended touchdown site by about 4 miles (6.5 kilometers), Charles "Pete" Conrad Jr. and Alan Bean brought Apollo 12's lunar lander, Intrepid, down a mere 520 feet (160 meters) from NASA's robotic Surveyor 3 spacecraft, which had been on the lunar surface for 31 months. (The third Apollo 12 crewmate, Richard Gordon, continued to orbit the moon in the mission's command module, Yankee Clipper.)

During their time on the lunar surface, Conrad and Bean sawed some parts off of Surveyor 3, adding the hardware to the stash of dirt and rocks that would make the trip back to Earth. This off-world salvaging work allowed scientists to gauge how the harsh lunar environment affects spacecraft.

Conrad and Bean also deployed the five-instrument Apollo Lunar Surface Experiments Package (ALSEP), the most advanced scientific gear ever carried to another world to that point. For the next eight years, ALSEP collected lunar dust; monitored moonquakes; and characterized lunar magnetic fields, the moon's wispy atmosphere and the charged particles of the solar wind.

The Apollo 12 crew calibrated ALSEP's seismometer, by the way, by crashing Intrepid onto the surface intentionally after all three astronauts were safely aboard Yankee Clipper in lunar orbit. The lander hit the gray dirt about 40 miles (64 km) from the seismometer, which registered the resulting vibrations for nearly an hour — a duration that surprised mission scientists.

Apollo 12 is also memorable for some of its very human moments. For example, when Conrad — who was considerably shorter than Apollo 11 moonwalker Neil Armstrong — hopped off the bottom rung of Intrepid's ladder onto the lunar surface, he exclaimed, "Whoopee! Man, that may have been a small one for Neil, but that's a long one for me!"

(Also worth noting: Apollo 12 was struck by lightning twice just after launching from NASA's Kennedy Space Center in Florida. The strikes caused some temporary problems, but the crew was able to troubleshoot those issues with the help of flight controller John Aaron.)

Apollo 12's precision landing paved the way for future Apollo missions to target trickier, more diverse touchdown sites — places with an abundance of outcrops or craters, for instance. And that legacy carries on today, as NASA continues to hone its landing skills.

In February 2021, for example, the agency's robotic Mars 2020 rover will use "terrain relative navigation" to perform the most-precise planetary landing in the history of spaceflight. The six-wheeled robot will hunt for signs of life in an ancient river delta inside the Red Planet's 28-mile-wide (45 km) Jezero Crater, a rugged landscape featuring dunes, cliffs, rocky outcrops and other complex features.

Indeed, the Mars 2020 team feels a special kinship with the Apollo 12 mission, and not just because of groundbreaking touchdown tech. The Red Planet rover is also toting some very advanced scientific gear to another world, including an instrument called MOXIE designed to generate oxygen from the carbon-dioxide-dominated Martian air. And Mars 2020 will play a role in bringing some unprecedented samples down to Earth; the rover will collect and cache material for retrieval and return by a future mission.

"Isaac Newton once wrote, 'If I have seen further, it is by standing on the shoulders of giants,'" John McNamee, Mars 2020 project manager at NASA's Jet Propulsion Laboratory in Pasadena, California, said in a statement. "When Mars 2020 flies, it will allow us to see farther into the geologic history of the Red Planet than ever before, and that is happening because we too are standing on the shoulders of giants — giants like the crew of Apollo 12."