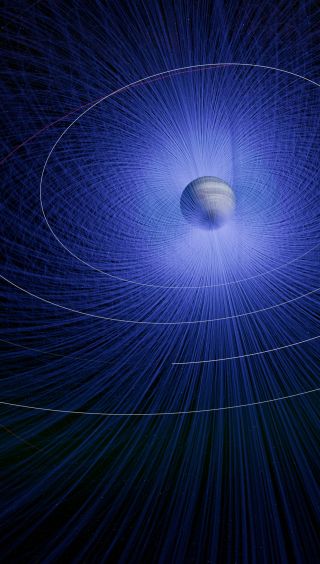 An early rendering of a data visualization of Jupiter's magnetic field from "Worlds Beyond Earth."
(Image: © AMNH)

Would you like Academy Award-winning actress Lupita Nyong'o to guide you on a journey through the solar system?

You'll be able to do just that with the new Hayden Planetarium space show coming to the  American Museum of Natural History (AMNH) in New York City this January.

The new space show, "Worlds Beyond Earth," which is narrated by Nyong'o, explores the various worlds in our solar system.

"It’s not just planets. We'd like to think about this as being about worlds because, as you know, moons of Saturn, for example, Titan, are worlds of their own. They're complex, interacting systems," Denton Ebel, who curates the new show, told Space.com.

Compared with shows like the currently playing "Dark Universe,"  which have focused on large, cosmological topics like dark matter and dark energy, this show homes in on the strange and amazing processes that take place on worlds throughout our solar system.

"We're sort of virtually recreating some of the missions and explorations to these alien worlds in the planetarium. A very compelling experience for the visitors," senior producer Vivian Trakinski told Space.com.

"This is kind of a tour of the bazarr," space show director Carter Emmart, who serves as director of astrovisualization for the museum, told Space.com, describing how the show gives visitors a tour of the different worlds in our solar system.

To get a realistic picture of the worlds in our solar system, the show uses data from space agencies like NASA.

"One of the interesting things about the show is that we are able to showcase these worlds so vividly because we have so much data that’s been collected by dozens and dozens of missions from NASA and other international space agencies," Trakinski said. "The power of these space shows is that they're based in data; the visuals that you see are all authentic artifacts of our exploration."

"This show is so intuitive, it's so visual," Trakinski said. "I think that it's much more accessible in many ways than perhaps 'Dark Universe,'" Ebel added.

Nyong'o's inclusion as the show's narrator only adds to its accessibility. "We wanted somebody that people might identify with and would add something to the show," Trakinski said.

"Worlds Beyond Earth" officially opens Jan. 21, 2020. Until then, "Dark Universe" will continue to run. So for those who loved that show and want to see it again, or for those who have yet to see it, your time is running out to experience a stunning production.