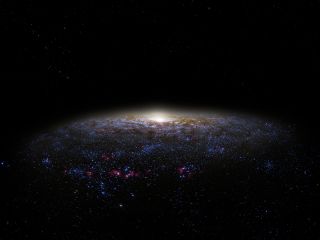 The visualization of the Milky Way Galaxy in Dark Universe shows the most accurate 3D simulation ever produced of our galaxy. Developed by the National Astrophysical Observatory of Japan, the high-resolution numerical model includes both stars and gas and is constrained to agree with actual observations of the galaxy.
(Image: © © AMNH)

A new planetarium show is set to blow the minds of kids and adults alike.

The American Museum of Natural History's newest show, "Dark Universe," is a 25-minute science lesson narrated by Hayden Planetarium director astrophysicist Neil deGrasse Tyson that explores some of the deepest and most complex mysteries in cosmology today.

"Most shows talk about what we know," Tyson, who also hosts TV's "Cosmos" reboot, told SPACE.com. "They're celebrations of discoveries, and this [planetarium show] is a celebration of our ignorance. It's a different kind of challenge … You're walking away from this saying, 'Wow, we are in a state of profound ignorance in our understanding of our place in the universe.' And that's a different message." [The "Dark Universe" Planetarium Show in Photos]

Each complicated concept presented in the show, which premiered on Nov. 2, is illustrated by detailed data visualizations produced in-house at the museum. This is the fifth planetarium show produced by the American Museum of Natural History.

The distribution of dark matter, a mysterious substance that cannot be directly observed but exerts gravitational force on visible matter, is represented as a spooky mass of dark, tangled strands throughout the sky.

Another visually stunning scene from "Dark Universe" shows a simulation of supernova explosions throughout the Milky Way galaxy.

"One of the curious facts about the universe is that … we know a little bit but we're ignorant of much more," Timothy Ferris, the writer of "Dark Universe," told SPACE.com. "[That is] the situation we'll always be in, and so will every other observer in the universe."

The show also includes the most accurate 3D simulation of the Milky Way ever produced, according to museum representatives. The entire show took about four years to create from concept to finished product, curator Mac Low said.

"This show has a dual theme. It's telling you about what we know and the parts we don't know either," Carter Emmart, the museum's director of astrovisualization, told SPACE.com. "But also, it's really trying to tell you how we know these things. We go out to a really far-out concept like dark matter and then bring it back."