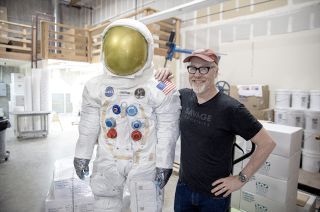 Adam Savage, posing with a 3D printed statue of Neil Armstrong's spacesuit, will assemble a full-size replica of an Apollo spacecraft crew hatch for the National Air and Space Museum.
(Image: © Tested.com)

The Mythbuster, maker and host of Science Channel's "Savage Builds," Savage has partnered with the National Air and Space Museum to create a full-scale replica of the crew hatch from an Apollo command module, the spacecraft that flew astronauts to and from the moon.

The build, to be conducted in front of the public at the Washington, D.C. museum on July 18, is part of the Smithsonian's celebration of the 50th anniversary of the first lunar landing.

"We're calling it Project Egress, and it consists of a LIFE-SIZE replica hatch to exhibit in the museum!" wrote Savage on Tested.com, where he serves as editor.

Using 3D scans of the Apollo 11 command module Columbia captured by the Smithsonian's Digitization Program Office and original engineering drawings from the museum's archives, Savage will piece together a replica of the mechanical hatch, which was used by astronauts to enter the spacecraft on the launch pad and exit — or egress — after splashing down from the moon.

Project Egress is possible due to the efforts of Andrew Barth, an engineering student who digitally modeled each of the hatch components using Autodesk's Fusion 360 software. The 3D render was then divided into its parts, which Savage sent out to 44 artists and fabrication shops to physically produce using various mediums and techniques.

"This is an artistic representation of the hatch, and a departure from my typical realistic replicas," explained Savage. "While the parts are all accurate in size to the original, they will be made in all different colors and finishes, a celebration of different fabrication techniques, some traditional, some cutting-edge."

One of the artists who Savage recruited was Ryan Nagata, who fabricated replica spacesuits and props for the Damien Chazelle movie "First Man" about Apollo 11 astronaut Neil Armstrong.

"I was very excited to make the window because it is such a recognizable piece," said Nagata in an interview with collectSPACE.com. "The image of the technician sealing the hatch and looking through that window in the movie 'Apollo 13,' and then the diver knocking on the window during recovery always sticks in my mind. It's an iconic piece."

Though he was only constrained by the dimensions of the actual window, Nagata chose to stay loyal to original.

"Because I make realistic replicas of space hardware, I chose to recreate it as literally as possible. I even added the navigational marks on the side that were lifted directly from the 3D scan, and added the locking tabs around the window frame that were used to secure some sort of cover," he said of his resin replica. "The command module windows evolved somewhat over the course of the program, but Columbia's hatch looked to be cast in some sort of resin. I don't think it was metal. So it's pretty accurate material-wise."

Savage will use Nagata's window and the parts fabricated by the other 40 artists to form the complete hatch. His creation will be staged in the National Air and Space Museum's Moving Beyond Earth gallery.

In addition to watching Savage work, the public can also assemble their own scale or full-size command module hatch thanks to the Smithsonian releasing the 3D data into the public domain. The files are now available to download for free from the Digitization Program's website.

The original Apollo 11 command module hatch is presently on tour with its parent spacecraft as part of the Smithsonian traveling exhibition "Destination Moon: The Apollo 11 Mission." The hatch will be on display at The Museum of Flight in Seattle for the 50th anniversary before moving in September to the Cincinnati Museum Center in Ohio.

The Project Egress build is part of the National Air and Space Museum's "Apollo 50 Festival," to be held July 18-20 on the National Mall. In addition to Savage's project, the multi-day event will feature displays by NASA, Boeing, Raytheon and The Lego Group, among others still to be announced.

Click through to collectSPACE to see the replica window that artist Ryan Nagata fabricated for Adam Savage's Project Egress.