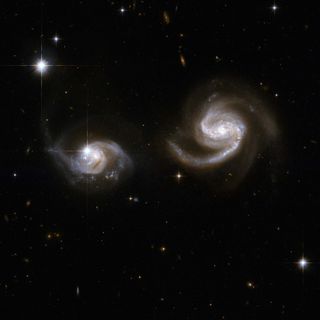 This Hubble image displays a pair of spiral galaxies with swirling arms. The binary galactic system is located in the constellation of Draco, the Dragon, about 350 million light-years (100 million parsecs) away. Astronomers studied galaxy pairs like this to determine the geometry of the universe, which shed light on dark energy.
(Image: © NASA, ESA, the Hubble Heritage (STScI/AURA)-ESA/Hubble Collaboration, and A. Evans (University of Virginia, Charlottesville/NRAO/Stony Brook University))

What Einstein called his worst mistake, scientists are now depending on to help explain the universe.

In 1917, Albert Einstein inserted a term called the cosmological constant into his theory of general relativity to force the equations  to predict a stationary universe in keeping with physicists' thinking at the time. When it became clear that the universe wasn't actually static, but was expanding instead, Einstein abandoned the constant, calling it the '"biggest blunder" of his life.

But lately scientists have revived Einstein's cosmological constant (denoted by the Greek capital letter lambda) to explain a mysterious force called dark energy that seems to be counteracting gravity -- causing the universe to expand at an accelerating pace.

A new study confirms that the cosmological constant is the best fit for dark energy, and offers the most precise and accurate estimate yet of its value, researchers said. The finding comes from a measurement of the universe's geometry that suggests our universe is flat, rather than spherical or curved.

Geometry of the universe

Physicists Christian Marinoni and Adeline Buzzi of the Universite de Provence in France found a new way to test the dark energy model that is completely independent of previous studies. Their method relies on distant observations of pairs of galaxies to measure the curvature of space.

"The most exciting aspect of the work is that there is no external data that we plug in," Marinoni told SPACE.com, meaning that their findings aren't dependent on other calculations that could be flawed.

The researchers probed dark energy by studying the geometry of the universe. The shape of space depends on what's in it ?that was one of the revelations of Einstein's general relativity, which showed tha tmass and energy (two sides of the same coin) bend space-time with their gravitational force.

Marinoni and Buzzi set out to calculate the contents of the universe -- i.e. how much mass and energy, including dark energy, it holds -- by measuring its shape.

There were three main options for the outcome.

Physics says the universe can either be flat like a plane,spherical like a globe, or hyperbolically curved like a saddle .Previous studies have favored the flat universe model, and this new calculation agreed.

The geometry of space-time can distort structures within it.The researchers studied observations of pairs of distant galaxies orbiting each other for evidence of this distortion, and used the magnitude of the distortion as a way to trace the shape of space-time.

To discover how much the galaxy pairs' shapes were being distorted, the researchers measured how much each galaxy's light was red-shifted ? that is, budged toward the red end of the visual spectrum by a process called the Doppler shift, which affects moving light or sound waves.

The redshift measurements offered away to plot the orientation and position of the orbiting pairs of galaxies. The resul tof these calculations pointed toward a flat universe.

Marinoni and Buzzi detail their findings in the Nov. 25 issue of the journal Nature.

By providing more evidence that the universe is flat, the findings bolster the cosmological constant model for dark energy over competing theories such as the idea that the general relativity equations for gravity are flawed.

Unfortunately, knowing that the cosmological constant is the best mathematical explanation for how dark energy is stretching out our universe doesn't help much in understanding why it exists at all.

"Many cosmologists regard determining the nature of dark energy and dark matter as the most important scientific question of the decade," wrote Alan Heavens of Scotland's University of Edinburgh in an accompanying essay in the same issue of Nature. "Our picture of the universe involves putting together a number of pieces of evidence, so it is appealing to hear of Marinoni and Buzzi's novel technique for testing the cosmological model, not least because it provides a very direct and simple measurement of the geometry of the universe."