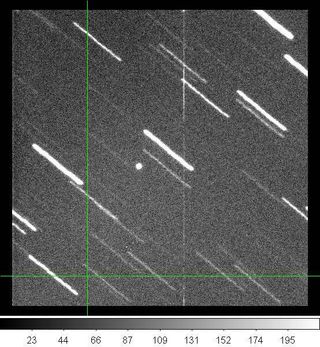 A small asteroid that zipped by the Earth this week has turned out to be no slow poke. It is the second-fastest spinning asteroid ever seen, astronomers say.

The asteroid was tiny, just 10 feet (3 meters) across and posed no threat of hitting Earth. In fact, it was so small that it would break apart before passing through Earth's atmosphere, NASA scientists said.

But the relative harmlessness of asteroid 2010 WA did not make it any less interesting to scientists.

Astronomers with the Magdalena Ridge Observatory near Socorro, N.M., trained a 2.4-meter telescope on the asteroid as it sailed past the Earth Tuesday at 10:44 p.m. EST (0344 Nov. 17 GMT).

What they found was surprising.

"We measured the rotation rate of the asteroid at about 31 seconds," astronomer Eileen Ryan, the observatory's director, told SPACE.com in an e-mail. "This makes it the second fastest rotating asteroid discovered to date."

Despite its small size, the asteroid still appeared as a bright object on a dark background in images taken by the observatory's telescope, which is built for tracking near-Earth objects (NEOs) and satellites, Ryan said.

"Because of this unusual feature, tracking fast-moving NEOs like 2010 WA is fairly easy for us," Ryan said.

The next time asteroid 2010 WA will come anywhere near Earth's cosmic neighborhood is in September 2013, but that pass will be considerably farther - about the equivalent of the distance between the Earth and the sun (93 million miles, or 150 million km), Ryan added.

Asteroid 2010 WA was the fourth space rock in three months to zip by the Earth within the orbit of the moon.

NASA regularly tracks asteroids and comets that fly near Earth as part of the Near-Earth Object Observations program. The monitoring program uses a network of ground and space telescopes to monitor the space rock environment around the planet.

To date, the program has tracked about 85 percent of the largest asteroids that fly near Earth and 15 percent of asteroids around 460 feet (140 m) across, according to the latest tally.

The U.S. space agency also plans to send astronauts to an asteroid by 2025 under a space plan ordered by President Obama. Such a mission could help scientists better understand the makeup of asteroids and to determine better means of deflecting them before they pose a threat to Earth, agency officials have said.