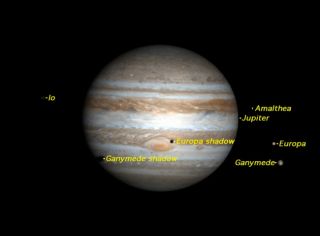 On Nov. 6/7, 2010, the shadows of Europa and Ganymede will cross Jupiter's face simultaneously, while the Red Spot gets a black eye. This view shows Jupiter as it will appear on Nov. 7, 2010 at 1:15 a.m. Pacific Daylight Time from California.
(Image: © StarryNight Software)

This weekend, a remarkable seriesof events will takeplace on Jupiter: The planet's four big moons will cast shadows on thegasgiant planet that can be seen from Earth using a small telescope.

The planetary shadow play, whichbegins Saturday night(Nov. 6) and runs through early Sunday, will be primarily visible fromthewestern coast of the United States. [Illustration:Moonshadows on Jupiter]

The four bright moonsof Jupiter are known as the Galilean moons after theirdiscoverer GalileoGalilei. As they revolve around Jupiter, they sometimes pass across theface ofthe planet as seen from Earth, as well as behind the planet and in itsshadow.

All of these events can be observedwith a smalltelescope. You just need to know where ? and when ? to look.

How to see Jupiter's moonshadows

First, a word of caution: Theovernight between Saturdayand Sunday is when we switch back from daylight saving time to standardtime,so be careful you get the correct time for your location.

Because the complete sequence ofevents is only observablefrom the U.S. West Coast, we will use Pacific Time here to discuss thebestviewing times. Observers further east will miss the later events, andshouldadd the appropriate number of hours to the times depending on theirlocationand time zone.

Because Ganymede has a relativelydark surface, it appearsbright against the limb of Jupiter ? but quickly appears to change to adarkgray against the bright central parts of Jupiter's disk. This can beseen withtelescopes that have as small as a 5-inch aperture.

Because Europa?s surface is icy, itreflects a much morelight than Ganymede, and closely matches Jupiter's cloud belts behindit. As aresult, it vanishes in all but the largest telescopes, perfectlycamouflaged.

At 10:24 p.m. PDT, yet another moon ? the volcanic Io ?begins to disappear behind the opposite side ofJupiter.

At 11:52 p.m. PDT, Europa's shadowstarts to take a notchout of the western limb of Jupiter. This can be seen with telescopesthat have assmall as a 3-inch aperture. Two minutes later, Ganymede moves off thedisk ofJupiter and is once again a bright spot in the sky.

Thiscomputer-generatedimage shows a simulation ofhow Jupiter will appear in telescopes at 12:15 a.m. PDT on Sunday, Nov.7.

Note that this uses a generic imagefor the planet?s cloudsurface ? currently, the cloud belt in which the Great Red Spot rideshas fadedto match the neighboring bright zones. Io has emerged from behindJupiteritself, but is still eclipsed by Jupiter?s mighty shadow and henceinvisible.

But wait, there's more ? theJupiter moon show isn't overjust yet. Here's a rundown of the movements of Jupiter's moons to watchfor onSunday: