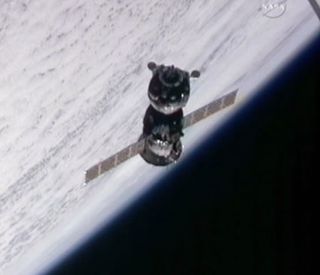 The new Soyuz TMA-01M is seen closing in on the International Space Station with three new crewmembers for the Expedition 25 crew on Oct. 9, 2010 in this view from a camera on the station's exterior.

A NASA astronaut and two Russian cosmonauts successfullydocked their Soyuz spacecraft at the International Space Station Saturday (Oct.9) to begin a months-long stay on the orbiting laboratory.

The new Soyuz TMA-01M spacecraft linked up with the spacestation at 8:01 p.m. EDT (0001 GMT Sunday), ending a trip that beganwith a launch two days earlier from Baikonur Cosmodrome in Kazakhstan.

Riding aboard the Soyuz are American astronaut Scott Kelly,Alexander Kaleri and Oleg Skripochka. The three men are expected to spend morethan five months aboard the InternationalSpace Station.

"We have contact," one of the spaceflyers said asthe Soyuz TMA-01M vehicle docked at the space station. Both spacecraft wereflying more than 220 miles (354 km) above the southern Pacific Ocean, just offthe coast from Chile.

All six spaceflyers shared warm hugs and smiles after thehatches between their two spacecraft were opened.

One of them, Scott Kelly, got a special call from his twinbrother Mark ? who is also a NASA astronaut.

The Kelly brothers are both U.S. Navy captains and theworld's only identicaltwin astronauts. They plan to meet up in March 2011 when Mark Kelly will leadNASA's final flight of the shuttle Endeavour, which will visit the spacestation while Scott is in command.

During his call, Mark Kelly joked that he was actuallyScott and that the twins had switched places before the Soyuz launch because"six months in space is a long time." [Video:NASA's Identical Twin Astronauts]

In reality, Scott Kelly is in space, but he laughed out loudat his older (by six minutes) brother's joke.

"That is pretty funny," Scott said with a smile.

Mark promised to bring his brother's stuff to the spacestation when he visits next year.

In November, Scott Kelly will take command of the station'sExpedition 26 mission, when Wheelock, Walker and Yurchikhin return home.

During their stay, the astronauts will be involved ingeneral upkeep of the station, as well as a variety of scientific research andexperiments.

Those experiments began at launch, which marked the firstflight test of Russia's new Soyuz vehicle model, the TMA-01M, which featuresupgrade navigation systems among other improvements.

"The main goal is to keep the station in good shape andto maintain all the equipment working, and to perform a huge scientific programfor all the international partners," Kaleri said in a preflight interview."For me personally, my main task will be to test the upgraded Soyuz inflight. So for me, the most important and most valuable flight stages will befrom the launch to the docking, from undocking to landing."

While this flight is Skripochka's first trip into space, hiscrewmembers, Kelly and Kaleri, are both veteran spaceflyers who have madeprevious visits to the space station.

The crew will be aboard the space station during the 10thanniversary of the first crew ever sent to the orbiting laboratory. That firstcrew, the three-man Expedition 1, launched on Oct. 31, 2000 and arrived on Nov.2 of that year.

In 2000, the space station only consisted of two Russianmodules and  a U.S. connecting node. Today, $100 billion space station hasmore than 10 rooms, as much living space as a Boeing 747 jumbo jet, and a maintruss as long as a football field. It is the product of five difference spaceagencies and 15 different countries.

The station's Expedition 25 crew plans to  host twovisiting space shuttle flights ? the shuttle Discovery in November andEndeavour in February next year ? plus the arrival of European and Japaneseunmanned freighter ships.

Endeavour's STS-134 mission next year ? commanded by MarkKelly ? is the last shuttle flight currently set on NASA's books, though onemore shuttle trip may be added to the lineup if President Obama signs the NASAauthorization bill recently passed by Congress and it passes through an appropriationreview.