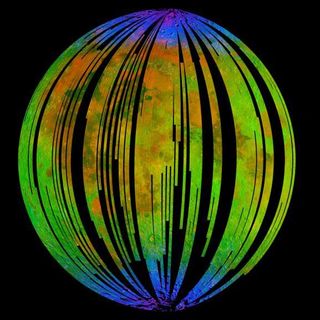 This image of the moon is from NASA's Moon Mineralogy Mapper on the Indian Space Research Organization's Chandrayaan-1 mission. It is a three-color composite of reflected near-infrared radiation from the sun, and illustrates the extent to which different materials are mapped across the side of the moon that faces Earth. Small amounts of water and hydroxyl (blue) were detected on the surface of the moon at various locations. This image illustrates their distribution at high latitudes toward the poles.
(Image: © ISRO/NASA/JPL-Caltech/Brown Univ./USGS)

Theseemingly barren moon may actually be a treasure-trove of priceless resources:a potentially bountiful, mineral-rich ? yet untapped ? cosmic quarry. Still,few see the moon as an alluring mining site, ripe for the picking of rareelements of strategic and national security importance.

Hereon Earth, China recently blockedthe export of rare earth elements to Japan for use in an array of products;from wind turbines and glass for solar panels to use in hybrid cars, and evenguided missiles and other defense-oriented creations.

Chinais increasingly putting the pinch on quotas of such elements out of theircountry. And as the scarcity of these valuable minerals grows, so too does theconcern in other nations regarding the availability of this limited resource.

Forinstance, a recent report from the Congressional Research Service ? a study armof the U.S. Congress ? reviewed the worldly use of rareearth elements for national defense.

Thereport looked at the production of elements such as europium and tantalum,among others, outside the United States and flagged the important issue ofsupply vulnerability.

Thestudy pointed out that rare earth elements are used for new energy technologiesand national security applications and asked: Is the United States vulnerableto supply disruptions of these elements? Are they essential to U.S. nationalsecurity and economic well-being?

Givenall the mineral mischief here on Earth, the moon could become a wellspring ofessential resources ? but at what quality, quantity and outlay to extract? [10Coolest New Moon Discoveries]

"Yes,we know there are local concentrations of REE on the moon," Pieters told SPACE.com,referring to rare earth elements by their acronym REE. "We also know fromthe returned samples that we have not sampled these REE concentrationsdirectly, but can readily detect them along a mixing line with many of thesamples we do have."

Amongother findings, the M3 gear found a whole new range of processes for mineralconcentrations on the moon ? unappreciated until now.

Forexample, the M3 experiment detected a new lunar rock ? a unique mixture ofplain-old plagioclase ? plentiful in the Earth?s crust and the moon?s highlands? and pink spinel, an especially beautiful arrangement of magnesium, aluminumand oxygen that, in its purest forms, is prized as a gemstone here on Earth.

Whatabout the whereabouts of precious elements sitting there on our celestialneighbor in gravitational lock?

Pieterssaid lunar scientists have a good idea how lunar rare earth elements becameconcentrated ? it occurred as part of the moon's magma ocean differentiationsequence. But it is now also recognized that "early events disrupted andsubstantially reorganized that process in ways we are still trying todecipher," she added.

Withthe recent, but limited, new data for the moon from the international fleetof lunar orbiters with remote sensing instruments ?? from Europe, Japan,China, India and now the United States, "we are beginning to see directevidence for the activity of geologic processes that separate and concentratedifferent minerals," Pieters said.

Onthe moon, these areas and outcrops are local and small. Exposure is largelydependent on using impact craters as probes to the interior.

Currentdata are only sufficient to indicate the presence of some concentrationsof minerals, but are inadequate to survey and map their character anddistribution, Pieters observed.

Alsoworking in the lunar mineral fray is Leslie Gertsch, a spacemining expert and deputy director of the Rock Mechanics and ExplosivesResearch Center at the Missouri University of Science and Technology in Rolla.She?s got the low-down on KREEP.

KREEPis an acronym based on element symbols for the geochemical component in lunarrocks rich in potassium (K), rare-earth elements (REE), phosphorus (P),thorium, and other incompatible elements, Gertsch explained.

"Theseelements are not incorporated into common rock-forming minerals during magmacrystallization ? hence they become enriched in the residual magma and in therocks that finally do form from it. This is especially so on the moon,"Gertsch said.

Onepopular model for the moon?s formation is that it solidified from a globalmagma ocean formed from material that aggregated after the young Earth impacteda Mars-sized planet, she explained.

KREEPis exposed on the lunar surface in certain areas, Gertsch said. Although rareearth elements are not themselves presently detectable by remote instruments,spotting thorium sharpens the ability to spot associated rare-earth elements onthe moon's surface due to similar geochemical properties that caused them tocrystallize under the same conditions, she added.

"However,separating rare earth elements from each other is difficult," Gertschnoted, "because there are few properties where they differ significantlyenough to permit efficient sorting of ore particles ? at least by standardmethods."

Gertschsaid that rare earth elements do sometimes occur in the ores of other metals.

"PresumablyREE mixtures could be produced on the moon and shipped to Earth for morespecific separation. Neither potential mining methods nor the economics ofthis particular approach have been studied, to my knowledge," Gertschconcluded.

Solet's say that the moon is rife with rare earth elements ?what now?

"I think that the economies of production hold sway here," said DaleBoucher, director of innovation at the Canada-based Northern Center forAdvanced Technology Inc., in Sudbury, Ontario.

Bouchersaid that the presence of rare earth elements on the moon can only be trulydetermined by a dedicated lunarexploration program. That would entail not just orbital sensing techniques,but actual drill cores and sampling in a fashion similar to standard mining andmineral exploration practices here on Earth.

Thiswill only provide gradation data -- but settle the issue of valuable rareelements on the moon ? "which can then be used to determine expectedreturned value and information on the viability of extraction of any particularelement," Boucher explained.

Bouchersaid that another issue is not about just digging them up, but rather theentire process of finding and refining.

"Itseems that there is significant quantity of REE's in North America, [it?s] justnot profitable to refine them ... yet. What value is the strategic element inthis? Can one put a price on this? If so, it may be economically viable toexplore the moon and extract the REEs," Boucher said.

Inthe end, the Boucher said, the whole premise revolves on a cost per pound atthe user's front door. "A very tough problem and well suited to a miningeconomist," he concluded.

Whilelunar rare earth elements may or may not be up for grabs, there's still anotherresource on the moon of high-value, argues one expert.

"Forrare earths, they are called rare for their low abundance, not economic value.However, some do have practical use in manufacturing, as in superconductingmagnets," said Paul Spudis, a planetary scientist and leading advocate forexploring the moon at the Lunar and Planetary Institute in Houston.

Spudissaid that moon-situated rare earth elements are in very low abundance, exceptin the KREEP terrain of the western near side.

"Theonly possible use of such I have heard of is the possibility of mining lunarthorium ? not a rare earth, strictly speaking, but associated with them ? tofuel nuclear reactors for power generation at a lunar base. Quite a distantprospect, I suspect," Spudis advised.

"It'suseful for life support, energy storage, and propellant. It can be extracted onthe moon and exported to cislunar space to create a permanent transportationsystem," Spudis said. "That?s strategy for you!"

Allthis being said, a question: On the 20- to 50-year timeframe, are therevaluable or strategic resources on the moon?

"Itis not possible to fully predict what will be important in the future, but Iexpect the answer is yes," Pieters said.

"Resourceknowledge is one aspect of lunar exploration that certainly drives the non-USspace-faring nations. It is disappointing that planners in our [U.S.] spaceprogram have not invested in that scope or time scale," Pieters added."Other than the flurry over looking for water in lunar polar shadows, noserious effort has been taken to document and evaluate the mineral resourcesthat occur on Earth?s nearest neighbor. Frustrating!"

LeonardDavid has been reporting on the space industry for more than five decades. Heis past editor-in-chief of the National Space Society's Ad Astra andSpace World magazines and has written for SPACE.com since 1999.