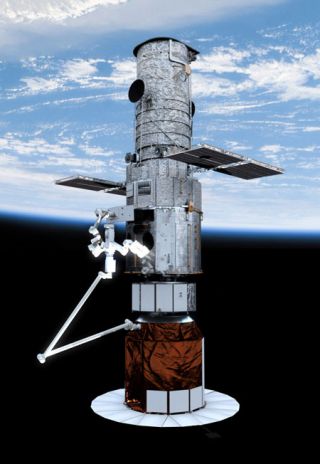 Major review of Hubble servicing held last week has moved NASA toward a deorbit-only option. Teams have made major strides toward telerobotic servicing of the orbiting observatory, but work effort is now being focused on a deorbit-only decision. Image
(Image: © NASA)

A major review last week of servicing the Hubble Space Telescope has led NASA officials to a "deorbit only" position.

That's an outcome from an intensive preliminary design review held last week at the NASA Goddard Space Flight Center in Greenbelt, Maryland. That appraisal involved volumes of technical data, with over 200 experts from NASA and aerospace industry contractor teams attending.

The assessment backs an earlier decision by the White House to scuttle the Hubble. A robotically-controlled liquid-fueled motor would eventually be docked to the telescope. Once ignited, the engine would push the huge observatory into a controlled nose-dive into a remote ocean spot.

Intensive work has been underway at Goddard to develop the tools, technology, and procedures for telerobotic servicing of Hubble. That NASA-contracted effort has been led by MD Robotics of Brampton, Ontario.

Impressive, but not revelatory

"The NASA position is [that] we are not contemplating continuing the telerobotic servicing mission," said the space agency's program executive for the Hubble Robotic Servicing Mission, Mark Borkowski, who also led last week's review. "We are planning to convert to a deorbit-only mission," he told SPACE.com.

Borkowski said that those engaged in working toward the Preliminary Design Review (PDR) did a "super job". But he mirrored the view of an earlier National Academy of Sciences look at Hubble servicing options. That blue-ribbon panel study took the position that the chance of success for a robotic makeover of Hubble was remote.

"Now we're going to go through a very deliberative decision process here [at NASA Headquarters]. We will listen to what people have to say," Borkowski said. "We don't want to sound like we're irrationally inflexible," he added, "but at this point we don't see a likelihood that there is some new information out there that's going to cause us to have a revelation. What we saw was impressive, but not revelatory."

One is the entire concept of doing an autonomous docking of deorbit hardware with Hubble, Borkowski said. "That's not a trivial little exercise," he said.

Provisions are being made in the event that Hubble could be in a slow tumble. "We have to account for a lot of this being done autonomously. That's probably a significant technical challenge...not insurmountable...but, again, it's the kind of thing that makes you scratch your head about the schedule," Borkowski advised.

Among other issues deserving of added attention, Borkowski continued, is software development. Keeping close tabs on software development will be key, to avoid any potential risk of impacting the deorbit schedule. Lastly, integrating all the computer smarts and hardware is likely to create surprises. A risk management plan to deal with uncertainty will be needed, he said.

Just how healthy is the Hubble at this point in time?

The telescope's gyroscopes are the first threat to the observatory's scientific utility, Borkowski said. Gyro lifetime is based on a probability distribution, he said, but studies point to the hardware working out as far as 2008. "And we think our batteries will be good until then."

There are a range of projections when Hubble's batteries might fail, with sometime around 2010 the best guess, Borkowski said. "Our best estimate is we probably will be able to continue to do science as we're doing it...somewhere into 2008," he explained.

To reach that 2008, there is now talk of turning one of Hubble's three working gyros off. A two gyro option appears workable, while maintaining the telescope's roster of science looks into the universe. That third gyro would be placed in storage mode, brought on line in the event that one of the operating gyros breaks down.

Last week's preliminary design review for Hubble servicing was "one of the better ones I've seen," Borkowski. Volumes of technical documents were amassed, he said.

"We now have a job here in the agency to collect all that information and to make a good comprehensive, deliberative decision about how to convert the mission to deorbit only," Borkowski stated.

Moving forward on that decision should happen in early May. "We'll then issue whatever direction we need to issue...whatever notification we need to make to Congress about how we're proceeding," Borkowski concluded.

While NASA blanches at any suggestion of humans versus robots in regards to future space exploration, the ongoing Hubble saga has brought to center stage such deliberation.

For example, leaders from two public space advocacy groups have called for repairing and upgrading the Hubble Space Telescope - dismissing telerobotics in favor of humans.

In a joint statement released this week, Mars Society president Robert Zubrin and Space Frontier Foundation founder, Rick Tumlinson, called upon NASA "to do what is necessary and mount a human mission to repair and upgrade the Hubble Space Telescope."

Their statement explained that if the space frontier is to be opened, "it can only be done through courage. A decision to mount a human mission to repair Hubble would send a signal that the spirit that built this nation is alive and well."

But according to insiders close to the Hubble servicing effort, significant progress has been made in readying telerobotic gear. Furthermore, adding more time onto Hubble's life by finessing gyroscopes and better battery management adds up to less pressure in readying a robotic visit.

"When you tell people working on Hubble that something can't be done...they just take that as a challenge," said one senior official taking part in last week's review. The telerobotic experts working on Hubble servicing have "hit a home run" in demonstrating an ability to overhaul the telescope, as well as give it a set of new instruments, the source said.

"We sure don't see any showstoppers," the source said.