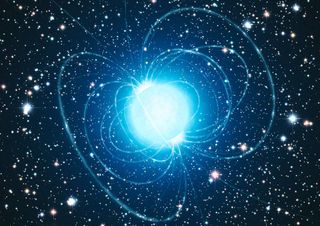 This artist’s impression shows the magnetar in the very rich and young star cluster Westerlund 1. This remarkable cluster contains hundreds of very massive stars, some shining with a brilliance of almost one million suns. Full story.
(Image: © ESO/L. Calçada)

Astronomershave discovered a massive star that once dwarfed our sun and is now challengingtheories of how stars evolve, die and form black holes.

The star isa peculiar cosmic object known as a magnetar. Magnetars are extremely dense,super-magnetic stars that can form from supernova explosions. [Photo of themassive star. ]

The newlydiscovered magnetar is perplexing, because astronomers have calculated that itsprogenitor likely weighed at least 40 times as much as the sun. Large stars inthis mass category are thought to become blackholes, not magnetars, when they explode in supernovas.

"Thistherefore raises the thorny question of just how massive a star has to be tocollapse to form a black hole if stars over 40 times as heavy as our sun cannotmanage this feat," said researcher Norbert Langer of the Universit?t Bonnin Germany and the Universiteit Utrecht in the Netherlands.

When massivestars reach the end of their lives and die in supernovas, they leave behindremnants. If the star is very massive, that remnant is a black hole ? an extremely dense collection ofmass with such a strong gravitational pull, not even light can escape.

If theoriginal star was slightly less massive, the supernova remnant will become a neutron star. These objects, made of mostlyneutrons, are more dense than a regular star but less dense than a black hole.

Magnetars are a type of neutron star with colossal magnetic fields that are about amillion billion times stronger than that of Earth.

This unusualmagnetar star was discovered in the star cluster Westerlund 1, located 16,000light-years away in the southern constellation of Ara (the Altar).

This specialclump of hundreds of massive stars was formed in a single event, which meansthat all its stars are roughly the same age ? between 3.5 and 5 million yearsold.

The age andcharacteristics of the cluster allowed astronomers to estimate the mass of themagnetar, which is one of only a few magnetars known in the Milky Way. Its massputs it well within the range expected to create a black hole.

Scientistshave thought that stars with initial masses between about 10 and 25 suns wouldform neutron stars when they die, while stars above 25 times that of the sunwould produce black holes.

Theresearchers think the magnetar in question must have lost much of its massbefore it died to have ended up the way it did.

"Thesestars must get rid of more than nine tenths of their mass before exploding as asupernova, or they would otherwise have created a black hole instead," said researcherIgnacio Negueruela of the Universidad de Alicante in Spain. "Such hugemass losses before the explosion present great challenges to current theoriesof stellar evolution."

Theresearchers observed the magnetar with the European Southern Observatory's VeryLarge Telescope in Chile. They detailed their findings in a paper to bepublished in an upcoming issue of the journal Astronomy and Astrophysics.