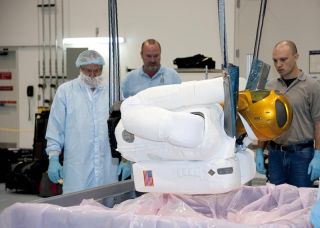 A crane is used to lift the 330-pound Robonaut 2 out of its shipping container at NASA's Kennedy Space Center in Florida. The robot will be placed inside a different packing arrangement designed for the unique demands of launch and spaceflight.
(Image: © NASA/Kim Shiflett)

CAPE CANAVERAL, Fla. ? NASA is packing up a 300-pound robot helper for atrip to the International Space Station later this year.

The humanoid robot, called Robonaut 2, is not exactly ridingfirst class into space. Instead of a seat alongside its human counterparts, Robonaut 2 is being packed into a foam-padded stowage unitfor its planned November launch on the space shuttle Discovery, NASA's deputy Robonaut project manager Nic Radford told SPACE.com.

Radford and other members of the engineering team demonstrated the robot?scapabilities to reporters this week in the Space Station Processing Facility atNASA's Kennedy Space Center ? the home port of the space shuttle fleet.

Robonaut 2, or R2 for short, will launch on spaceshuttle Discovery as part of the STS-133 mission that is currently scheduled tolift off Nov. 1.

It will be the first human-like robot to become a permanent resident at thespace station. The robot even has its own Twitter account (@AstroRobonaut) where its humanhandlers are posting updates for the automaton's mission.

"Just powered down for the last time. Next time I power up will be onthe ISS!" the R2 unit's handlers wrote for the robot Friday.

The dextrous robot resembles a humanand is specifically designed to operate like one. It consists of a head andtorso with two arms and two five-fingered hands. Advanced control and sensortechnologies allow R2 to operate as an assistant to the station astronauts.

?The robot is designed to work with tools that the astronauts use,? said RonDiftler, Robonaut projectmanager. ?It is more dextrous and more capable thanits immediate predecessor, Robonaut 1.?

Diftler demonstrated the sensitivity of R2?scomponents by placing his hand in the robot?s hand. As he began the handshakingmotion of pumping up and down, R2 recognized the action and effectively shookhands with his project manager.

At the moment, R2 has limited mobility, but in the future, the greatestbenefit of humanoid robots in space may be as assistants or stand-ins forastronauts during spacewalks, or for other tasks that are too difficult ordangerous for humans, Robonaut designers have said.

Future enhancements and modifications may allow R2 to move freely around thestation?s interior or outside the orbiting complex.

NASA is hoping to develop a phased approach to R2?s upgrades, which couldinclude the addition of vision, mobile and vocal components in the future.These upgrades will largely be based on the robot?s performance on orbit, inaddition to adequate funding for the project.

In fact, a more mobile version of R2 may already be close on the horizon.

?Pending funding, we could have something up in 18 months,? Radford toldSPACE.com.

Robonaut 2 was developed by NASA in partnershipwith General Motors (GM) under a cooperative agreement to develop a robotic assistant that can work alongside humans,whether they are astronauts in space or workers at GM manufacturing plants onEarth.

Many of the tests and procedures being conducted on R2 also benefit the teamat GM. The automaker plans to use technologies from R2 in future advanced vehiclesafety systems and manufacturing plan applications.

The idea of using dextrous, human-like robots thatare capable of using their hands to do intricate work is not new to theaerospace industry.

The original Robonaut 1 designed for space travelwas built by the software, robotics and simulated division at Johnson SpaceCenter in Houston, in collaboration with the Defense Advanced Research ProjectAgency 10 years ago.