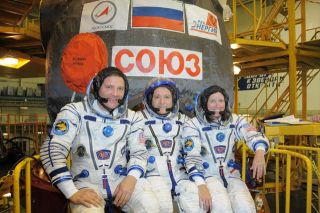 Two American astronauts and a Russian cosmonaut living on the International Space Station will have to return to Earth a few days early to avoid interfering with an international security summit being held near their landing site in Central Asia.

NASA astronauts Shannon Walker and Douglas Wheelock and Russian cosmonaut Fyodor Yurchikhin are now slated to land their Russian Soyuz TMA-19 space capsule on the central steppes of Kazakhstan on Thursday, Nov. 25 at 11:46 p.m. EST (0446 GMT on Nov. 26). The crew is wrapping up a five-month flight to the International Space Station.

The Soyuz landing was originally scheduled to occur four days later, on Nov. 30, but Kazakh officials wanted to restrict air traffic a few days before the start of the Organization for Security and Cooperation in Europe summit, which is being held in Astana, Kazakhstan, Dec. 1-2.

Astana is approximately 250 miles (400 kilometers) away from the Soyuz landing site.

"Kazakh officials asked our Russian partners if they could make the adjustment to avoid conflicts with the conference," NASA spokesman Kelly Humphries told SPACE.com from the Johnson Space Center in Houston. "There's some preparation work that's going to have to be changed a little bit, and some maintenance work that requires additional crewmembers will be shifted."

The adjustments are not expected to cause any problems, and with the opening of the next space shuttle launch window quickly approaching, the change might even free up some traffic in space.

"There was already work in the mill regarding a Nov. 30th launch of the shuttle to begin that mission," Humphries said. "So, maybe it's going to work out nicely for the crew with this time frame shifted over a little bit."

NASA is preparing space shuttle Discovery is slated to fly on its final voyage on Nov. 30. That launch target, however, depends on the completions of repairs being made to Discovery's external fuel tank. The launch window for Discovery opens on Nov. 30 and closes on Dec. 6.

In the meantime, Yurchikhin, Walker and Wheelock will continue making preparations for their homecoming as they near the end of their long-duration stay aboard the space station.The three spaceflyers launched to the station on a Russian Soyuz rocket on June 15.

After their departure, the station will drop down to a three-person crew  until mid-December, when Catherine Coleman, Paolo Nespoli and Dmitri Kondratyev journey to the space station to round out the outpost's Expedition 26 crew.