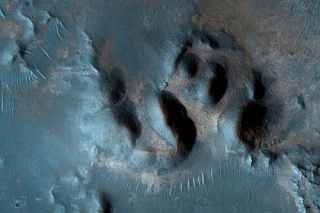 The Nili Fossae region of Mars is one of the largest exposures of clay minerals discovered. In this HiRISE false-color image, dark blue regions are volcanic minerals. Light-toned areas are clay-rich material and may contain water and organic materials--a possible place where life can be supported.
(Image: © NASA/JPL/University of Arizona)

A spoton Mars called Nili Fossae that is rich in clay mineral-rich rocks could be a primespot to search for the fossilized remains of Martian life that may have existed4 billion years ago, a new study suggests.

Thestudy does not offer actual evidence of past life; rather, it suggests a placethat might have been habitable.

"Wesuggest that the associated hydrothermal activity would have providedsufficient energy for biologicalactivity on early Mars at Nili Fossae," said study lead author AdrianBrown, a scientist at the Search for Extraterrestrial Intelligence Institute(SETI) in Mountain View, Calif., in a statement.

Thestudy's findings will be detailed in an upcoming issue of the journal Earthand Planetary Science Letters.

Scientistshave not yet discovered proof of life onMars, or anywhere in the universe beyond Earth, though they are gettingcloser to knowing where to look and how to recognize the signs of life if theyare present.

Brownand his colleagues studied the hydrothermal formation of clay-carbonate rocksin the Nili Fossae region on Mars. Their results suggest that thesecarbonate-bearing rocks share similarities with traces of life and biologicalmarkers on early Earth ? particularly in a region of Western Australia.

TheNili Fossae are valleys that have cut into the ancient crust of Mars, exposingclay minerals.

TheMars terrain in this region shares many traits with Australia's East Pilbararegion, which has preserved evidence of ancient Earth life beneath the soil,they said.

"Inthe article, we discuss the potential of the Archean volcanic of the EastPilbara region of Western Australia as an analog for the Noachian Nili Fossaeon Mars," Brown said. "They indicate that biomarkers or evidenceof living organisms, if produced at Nili, could have been preserved, asthey have been in the North Pole Dome region of the Pilbara craton."

TheNili Fossae region was seen as an ideal area to investigate the potentialhabitability of early Mars. At one point, it was in the running as one of sevencandidate landing sites for NASA's upcoming Mars Science Laboratory rover mission.