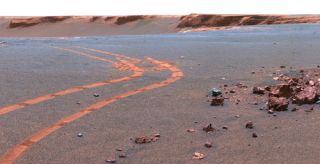 The equatorial plains of Mars' Meridiani Planum are the stopping — or rolling, as it were — grounds for NASA's Opportunity rover. Now into its fifth year exploring the planet, Opportunity has found firm evidence that liquid water once soaked the plains rocks in the distant past. Its robotic twin Spirit is also hard at work in Gusev Crater on the other side of Mars.

In 2004,NASA?s Opportunity rover found evidence in Martian soils that water had onceflowed across the surface there, buoying hopes that the red planet may oncehave supported primitive life.

But a newstudy throws some cold water, and a big pinch of salt, on those hopes.

"Liquidwater is required by all species on Earth and we've assumed that water is the veryleast that would be necessary for life on Mars,"said study team member Nicholas J. Tosca, a Harvard University postdoctoralresearcher. "However, to really assess Mars' habitability we need toconsider the properties of its water. Not all of Earth's waters are able tosupport life, and the limits of terrestrial life are sharply defined by water'stemperature, acidity and salinity."

Tosca andhis team analyzed salt deposits in the 4-billion-year-old Martian rockinvestigated by Opportunity (and by spacecraft orbiting the planet). The newanalysis shows that the water that would have flowed across these ancientMartian rocks may have been exceedinglybriny.

"Oursense has been that while Mars is a lousy environment for supporting lifetoday, long ago it might have more closely resembled Earth," said AndrewH. Knoll, also of Harvard and on the study team. "But this result suggestsquite strongly that even as long as four billion years ago, the surface of Marswould have been challenging for life. No matter how far back we peer into Mars'history, we may never see a point at which the planet really looked likeEarth."

Theresearch was presentedin February at the annual meeting of the American Association for theAdvancement of Science in Boston.

Halophiles,or organisms that can tolerate high-salinity waters, are known to exist inplaces on Earth, but they likely evolved from organisms that lived in purerwaters, scientists think, making it unlikely that life would actually ariseinitially in extremely briny waters.

The highsalinity, however, "doesn't rule out life forms of a type we've neverencountered," Knoll added, "but life that could originate and persistin such a salty setting would require biochemistry distinct from any knownamong even the most robust halophiles on Earth."

Knoll andTosca also say the finding doesn?t rule out the possibility that less saltywaters once flowed on the planet, though Meridiani Planum, where the Opportunityrocks were found, is believed to have been one of the wetter, more hospitableplaces on the planet.